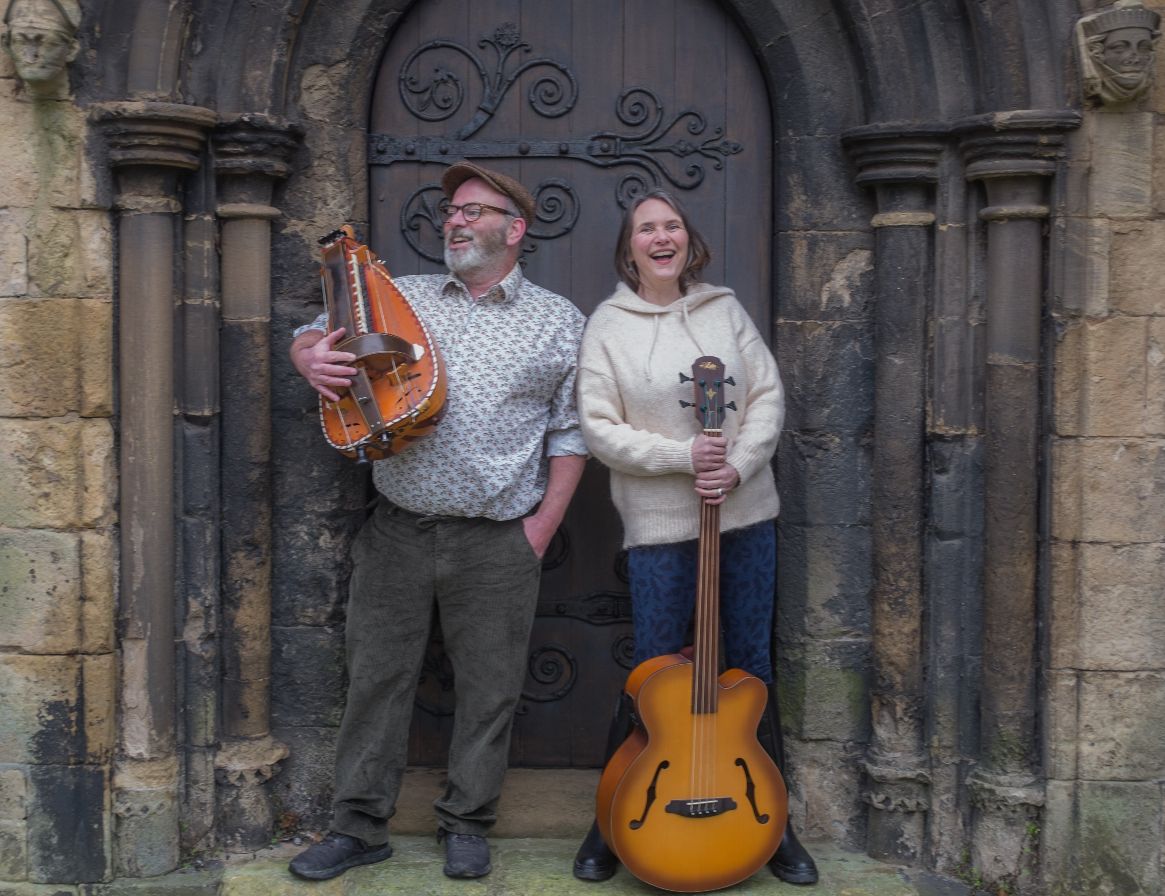 A lockdown music collaboration made in Yorkshire is catching the ears of aficionados from international specialist magazines and bloggers to pop superstar and BBC Radio 6 presenter Tom Robinson with audiences doubly impressed by the fact that the pair behind the project didn’t meet at all during the recording process.

Agent Starling – which comprises bass player and singer Lou Duffy-Howard and hurdy-gurdy player Quentin Budworth – have just released their second album in a year with all the tracks recorded remotely.

Add in a few numbers issued on a winter EP and you have a total of 27 songs which were pinged back and forth between Quentin’s home in Bridlington and Lou’s house – and home studio – in Hull prior to being polished and packaged ready for release.

The first album, European Howl, came out in May 2021 as the result of a lockdown project hatched when the pair couldn’t do their usual summer of festival gigs.

As the pandemic dragged on and the material mounted, a second album became inevitable, and the pair have now released Constellation of Birds. Yet the first time they got together in more than two years was for the photoshoot to promote the new record.

Both are well known internationally for their music and have worked together on various projects, including performing live shows at green gatherings and pagan festivals as part of world fusion medieval rave band Celtarabia.

Lou is a founder member of psychedelic rock band Loudhailer Electric Company and is currently working towards a reunion tour of England in April with the Red Guitars, the Hull-based band which became a John Peel favourite and topped the Indie charts in the 1980s.

Originally part of Suns of Arqa, Quentin tours the continent as part of a unique musical culture, exploring and developing his playing of the hurdy-gurdy and studying style, technique and repertoire with leading players of the rare and historic instrument from many different folk traditions.

Lou said: “During the pandemic it’s been really important for me to remain creative so I upgraded my home recording system and we used it to record the Agent Starling music. We have had some great results and we had a fantastic time doing it.

“Typically, for each song we started with a conversation about the framework of the song – the general feel, tempo, key, time signature. Then Quentin would record a hurdy-gurdy part in his home studio and send it to me.”

Lou developed the songs in her studio, adding rhythm tracks, playing bass and working in the lyrics, vocals and harmonies. Found sounds from around the house added some texture as did violin and cello parts contributed by Lou’s teenage son Dexter.

The fact that the tracks could be sent for professional mastering to Kevin Carafa in Oregon is less surprising than the revelation that his main area of work is hip-hop and electronic dance music.

Agent Starling are preparing to tour in 2023 and anticipation is building as a result of a strong of encouraging early reviews.

In his review in Songlines, Terry Gilliam wrote: “Experimental hurdy-gurdy on duo’s impressive debut. European Howl is a complex, immersive and at times disorienting listening experience.”

Neil March wrote in the Trust the Doc blog: “…an album that both respects and goes far beyond the traditions of hurdy-gurdy and European folk, embracing genres and creating lovely textures. You will not hear another album like this in 2022.”

Mike Davies, writing on the UK folk and Americana website Folking, described “… the disparate textures and threads they weave coalesce into a mesmerising tapestry of sound that is uniquely theirs.”

Tom Robinson told listeners on BBC Radio 6 Music: “In all the years since this podcast started I don’t think we’ve ever knowingly featured a hurdy-gurdy – but there’s a first time for everything thanks to Agent Starling.”

In Fatea Magazine, John Reed found Agent Starling “compelling, demanding, progressive” and said their music “fuses a range of cross-cultural folk-based sounds and moods. The album challenges and stretches boundaries, and occasionally – in a good way – feels slightly unhinged, but I absolutely love it when musicians dare to tread forth where many would turn on their heels and run…”

Quentin said: “I’ve played the hurdy-gurdy professionally for most of my adult life. Its drone, chanters and buzzing trompette create a unique musical world encompassing the ancient, modern and modal.

“When played as a solo instrument the hurdy-gurdy creates a delightful universe of sound in its own right needing no accompaniment. I bring the knowledge from my travels to my playing when recording for Agent Starling whether writing new compositions or interpreting traditional ones.

“I often spend several days researching, rehearsing and recording my parts to ensure that I am happy with my playing on the record before I send them to Lou.

Lou added: “There are not many people who play the hurdy-gurdy and Quentin is at the top of his game. He spent the first year of lockdown doing sessions and workshops with other hurdy-gurdy players throughout Europe.

“With lockdown I was free to just be creative and that’s how the Agent Starling tracks have come about. We have a third album partially recorded and we have made enough money to have some CDs made, building up what we can offer to the public, and enabling us to continue our musical adventure.”

An outdoor opera is heading to Hull Marina this summer