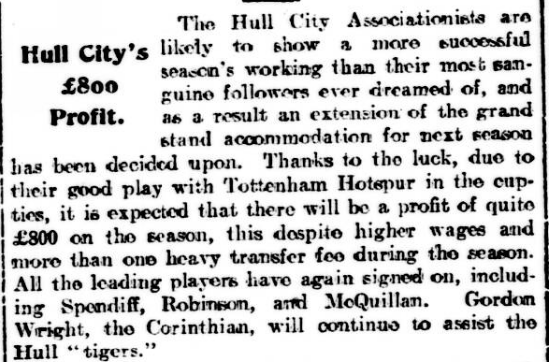 Hull City is often referred to as “The Tigers,” or “The Hull Tigers,” but it recently came to my attention that the origin of the name was somewhat unknown. I decided to go back into the archives to see how the name came to be.

Searching for the term “Hull Tigers” in the British newspapers I came across The Yorkshire Evening Post, dated Saturday April 13th 1907 listed the team as Hull City, but referred to them in the article as “The Hull Tigers.”

From as early as Thursday March 5th 1908 The Hull Daily Mail referred to the team as “The Hull Tigers,” and popular players, such as Jack Smith, were referred to as “A popular Tiger.”

It was clear that the name was created before this period, so I decided to go further back in time and look for the terms “Hull City,” with the word “Tiger” in a separate field. I discovered that as early as Monday March 6th 1905, The Hull Daily Mail, named the team “The Tigers.”

The short announcement was made in the newspaper on Page 2 in a popular daily column called “Mail Mems,” which looked at short snippets of news, factual information, and various other tidbits. It mentioned that a columnist at The Hull Daily Mail who covered sporting news named “Athleo,” had nicknamed the Hull City Team “The Tigers,” on account of their black and amber strip.

In the same issue of The Hull Daily Mail, dated Monday March 6th 1905, there is a report on page 5 which covers the nickname. The report featured the headline “WHY NOT “THE TIGERS?”” It stated that in the sporting world many teams take their nicknames from various things, including the colours of their strip, stating that we have the “All Blacks,” “The Robins,” so why can’t the “yellow and black stripes be the “Tigers”?”

Athleo’s identity remains a mystery, but his writing for The Hull Daily Mail began on Thursday April 18th 1889, and he, along with his team, nicknamed “Athleo’s Staff,” wrote over 2,400 articles for the newspaper.

From Monday March 20th 1905, The Hull Daily Mail named the team “The Tigers,” with the term being used for every match. It was reported in those very early days that the chant sung on the terrace was “Come on the Tigers.”

The rest, as they say, is history.