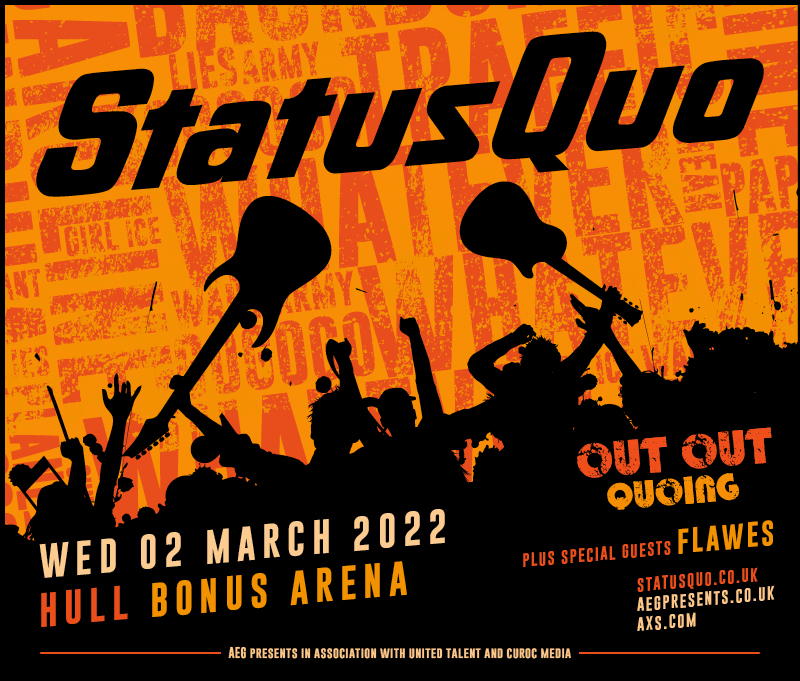 Status Quo make their first ever visit to the Bonus Arena, Hull on Wednesday, 2 March 2022.

In September 2019, QUO performed a triumphant set at the massive Radio 2 ‘Festival in a Day’ event in London’s Hyde Park in front of 65,000 fans. That turned out to be their last UK show as the ‘Backbone’ Winter Tour of 2020 was cancelled in its entirety due to Covid-19.

Now, STATUS QUO are delighted to be able to announce their long overdue return to the stage with the ‘Out Out Quoing’ tour.

Francis Rossi said, “We cannot wait to play again. Every gig is special for Quo but it’s been too long since we got to play anywhere. Going out is something that we all took for granted. Not any more. Going out, going out properly – ‘going out out’, as some would have it – became a bit of dream but now that dream can come true. The name of the tour is a bit of humour, but a celebration too. However, I’d urge fans not to overthink it and just prepare for all the hits and some serious live music energy!”

Status Quo are an English rock band that formed in 1962. The group originated as The Spectres and was founded by Francis Rossi and Alan Lancaster while they were still schoolboys.[1] After a number of lineup changes, which included the introduction of Rick Parfitt in 1967, the band became The Status Quo in 1967 and Status Quo in 1969.

They have had over 60 chart hits in the UK, more than any other rock band,[2] including “Rockin’ All Over the World“, “Whatever You Want” and “In the Army Now“. Twenty-two of these reached the Top 10 in the UK Singles Chart. In July 1985 the band opened Live Aid at Wembley Stadium with “Rockin’ All Over the World”.[3] In 1991, Status Quo received a Brit Award for Outstanding Contribution to Music.[4]

Status Quo appeared on the BBC’s Top of the Pops more than any other band[5] and played Wembley Arena more than any other band with 45 gigs in total.[6] They have released over 100 singles and 33 albums, many of which were best-sellers. Since reaching number 5 on the UK albums chart in 1972 with Piledriver, Status Quo have achieved a career total of 25 UK top ten albums, extending all the way up to their most recent release, Backbone, in 2019.

The above information about Status Quo came from wikipedia.org

HULL TRUCK THEATRE UPDATE | Coronavirus: a message to our audiences and community

Lifestylers are you up for the challenge?