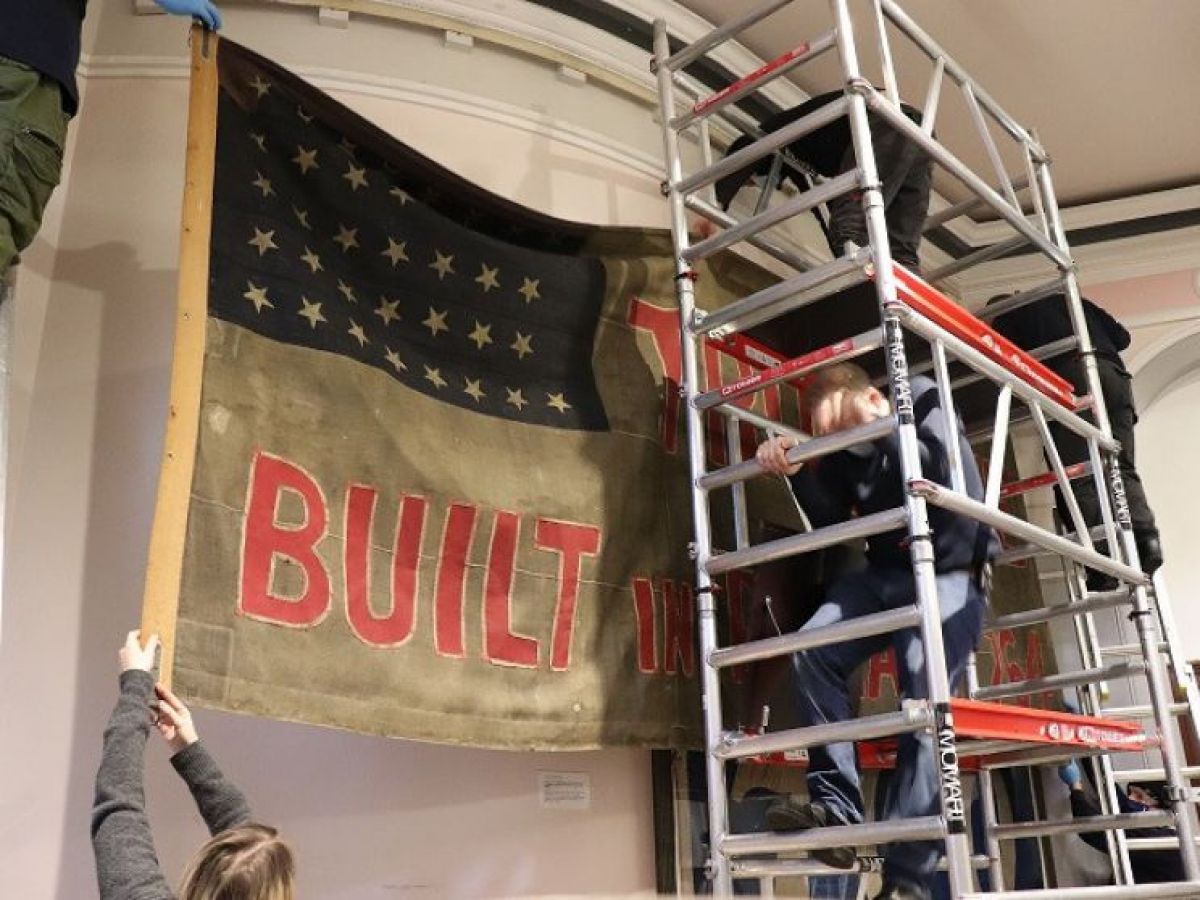 The Truelove flag, dating back to 1873, is to be conserved as part of the major Hull Maritime project.
The 147 year-old flag hung from the north wall of the old Pickering Park Museum and was on open display on the ground floor of the Hull Maritime Museum for four decades.

Last month, the rare 15ft wide flag of the Hull whaler Truelove mounted on the wall on the ground floor was lowered and moved to the Court Room.

Textile specialist, Kate Stockwell, has now further assessed its condition and taken a closer look at the work needed.
Records show that it was last treated in 1974, when the lining was removed and washed several times along with repairs to the stitching and re-lining using new backing fabric.

After more than 40 years of open display at ceiling height, the flag will require thorough, yet delicate, cleaning and localised repairs. A 5m long velcro strip positioned along the top edge will be carefully removed and the flag will be mounted on a bespoke aluminium frame for an improved display arrangement that meets current museum standards.
Stathis Tsolis, Conservation and Engagement Officer, said: “This flag has been on display for more than 40 years and in need of some treatment to save it for future generations.

“The large flag has a fascinating story to tell and the conservation treatment will ensure visitors will be able to admire it in the best possible condition.”

Once conserved, it will then packed using a bespoke container until it returns to the refurbished museum and will be prominently displayed as part of the new exhibition.

The Truelove was a Hull whaler with a long history. Built in Philadelphia in 1764 the Truelove was used during the American War of Independence (1775-1783). During this conflict the Truelove was captured by the British. It was then sold to John Voase, a wine merchant and ship owner in Hull.

After being strengthened, the Truelove began life as a whale ship in 1784 and made 72 voyages to the Arctic and caught over 400 whales under various captains. She made her last whaling voyage in 1868 when she and the Diana where the only whalers sailing out of Hull.

In 1873, the Truelove sailed as a merchant ship back into its home port of Philadelphia after a 109 year career. After causing a stir with the locals aware of its heritage, Captain Thomas Weatherill was presented with this flag.