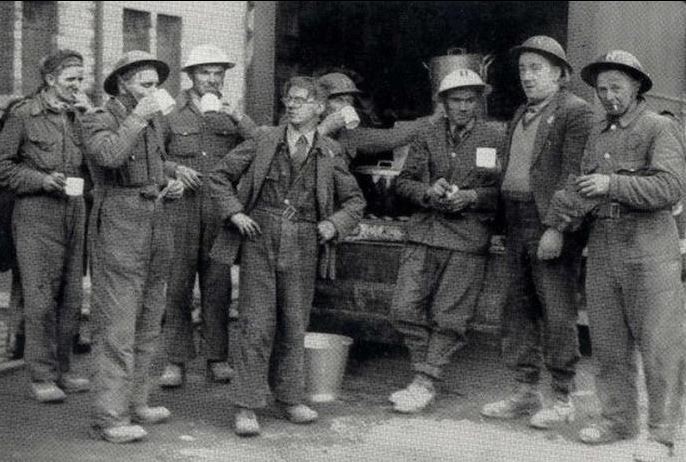 The humble cup of team is believed to make everything alright, but little has ever been written about its use in Hull during WWII to help during the Blitz and beyond.  At the time tea was used to lift the spirits of those in Hull, who were faced with dark days ahead.  It was rationed, and as such was seen as a luxury.

At night, when the air raid sirens sounded, and the bombs began to drop, a brave fleet of volunteers headed out into the city, armed not with guns or bombs, but with tea!

As early as November 21st 1939, funds were being raised in Hull for a “Mobile Canteen,” which it was hoped would serve the city during the war.  The idea was simple, the mobile unit would attend areas where people had been bombed out, where A.R.P. Wardens and Rescue Workers were busy working, and provide them with a cup of tea.  If they were lucky they might get a sandwich, and if they were really lucky they would get a slice of cake!

In February 1940 it was announced that the servicemen and women working in Hull during the war would have their own mobile canteen.  It was said that one was already operating in the city and was being run by the church.  Initially the Y.M.C.A. jumped in with the funding, and paid for two canteens to drive around the city in February 1940, but by March 1940 four more mobile canteens were added to the roster, with these four set aside for the teams working the search-lights and anti-aircraft guns.  By October 1940 the Women’s Voluntary Service (WVS) had also added a mobile canteen to the growing number which by October 11th 1940 now totalled nine!

By December 1940 the fleet of mobile canteens were able to provide 500 meals an hour to hungry workers and residents, but it was said that Hull still needed more.

In February 1941 Southern Rhodesia donated mobile canteens that would service Hull, and six other locations across Great Britain, it was the first of many that would be sent to Hull over the following weeks, months and years.

During April 1941, The Hull Corporation announced that it was to purchase six more mobile canteens for Hull. They would be run by the Hull Municipal Restaurants Committee, and staffed by members of the Salvation Army.

During the “Blitz” of May 7th, 8th, and 9th, reports came in that mobile canteens were driving between affected areas, serving tea, it was reported that each person received “a free cup of tea, and either a bun or a packet of biscuits.”

By the end of the war Hull had a large fleet of mobile canteens, staffed by volunteers who drove around the city at night, often while bombs were falling.  Several of these “tea vans” were sent from various businesses, organisations, and municipal organisations in America, Canada, and another from Southern Rhodesia. The city ended up with 29 mobile canteens which served the people of Hull during the city’s darkest days.

Hull local elections 2021: as it happened