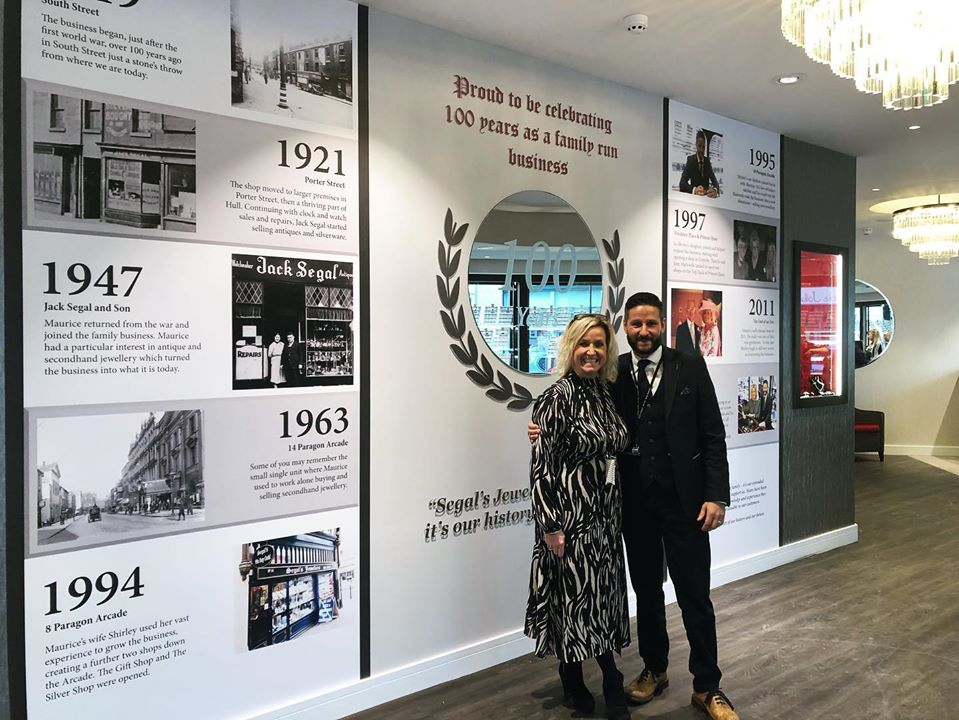 100 years ago in 1919, in a small shop on South Street in Hull, a business belonging to Jack Segal was born. Specialising in clock and watch repairs, it didn’t take long for Segal’s to become a household name and in 1921 as the business expanded to include the buying of gold, silver and antiques a move to larger premises was needed.

The new home of Segal’s was to be in Porter Street, a thriving part of Hull at the time for trading wares. Business was good until 1941 came and Hull saw the devastating effects of the blitz where many homes and lives were destroyed. Although large areas of Hull were bombed and had to be re-built, thankfully Segal’s narrowly missed the worst effects and continued to trade through the war years.

Jack’s son Maurice arrived home from the war and in 1947 joined the business. He had a particular interest in the antique and second-hand jewellery and started to repair and re-sell some pieces, forming the basis of the Segal’s Jewellers we know today.

1963 saw Maurice take over the business from his father Jack and move to a small unit in Paragon Arcade, part of our current Gift Shop site. The business then expanded further in 1994 thanks to Maurice’s wife Shirley. Two additional shops arrived in the Arcade forming Segal’s Gold Shop, Segal’s 2 Silver Shop and the Gift Shop and in 1995 the third generation of Segal’s arrived in the form of Shirley’s son Mathew. His expert eye in the world of diamonds and prestigious watches took the business to another level and Segal’s began to sell new jewellery alongside the pre-owned and antique.

Shirley’s daughter Jo then joined the business, expanding into Princes’ Quay and Freshney Place, Grimsby. 2011 saw the end to an era when Maurice sadly passed away. He was a true gentleman and the face of Segal’s for many years. Customers still talk fondly of deals done with him by their parents and grandparents.

To this day Shirley still very much oversees the business and alongside the third generation of Mat, his wife Jane, Jo and her husband Martin, the fourth generation have now begun to learn what the previous 100 years have taught us, that true family values and customer service can allow a business to not only survive but thrive through the good and the bad times. Testament to this is the wonderful new home of Segal’s Jewellers.

For years now ‘we need a bigger shop’ has been heard regularly from the cosy premises on the corner of Paragon Arcade and finally it’s happened. The new shiny shop on the corner of Carr Lane and Chariot Street very much embraces the feel of Segal’s, just with a little more sparkle.

Historic Truelove flag to be restored

The Mad Month of March: From White Rabbits to Mother’s Day