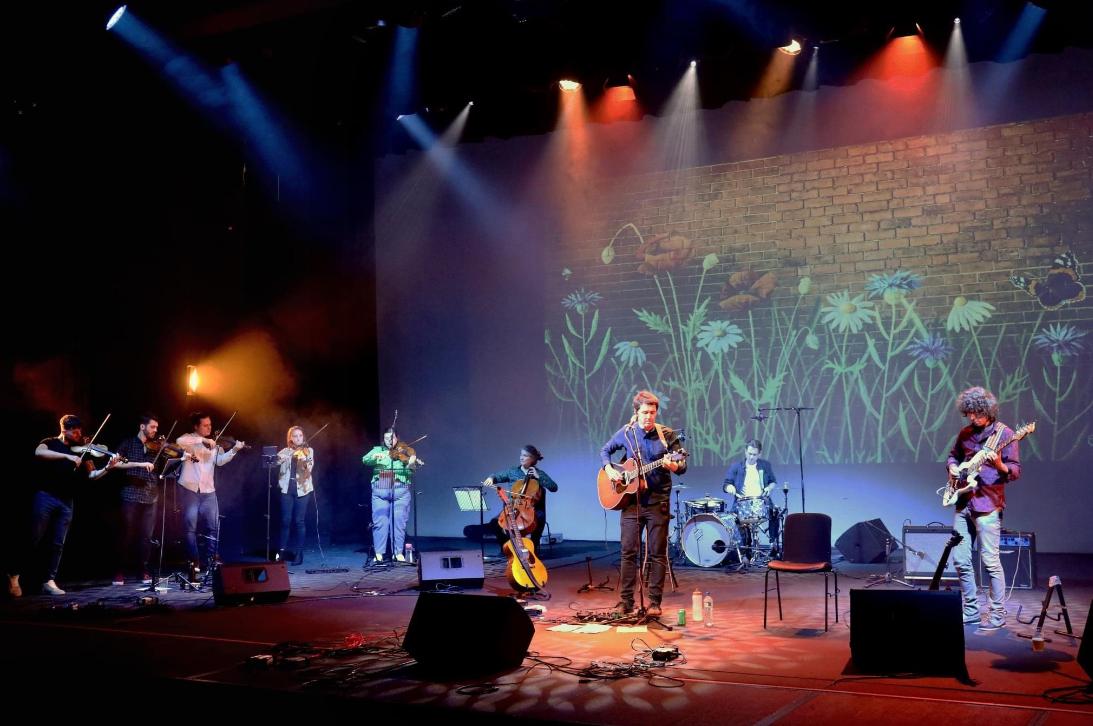 Pavey Ark are a fast-rising Alternative Folk band and part of the line up at the major music festival, they played the Acoustic Stage on Friday (24 June). Formed in 2016, the band expanded with University of Hull Music students joining when founding band member, singer-songwriter Neil Thomas, wanted to add violinists to Pavey Ark’s first live gig.

Neil said: “Playing one of the main stages at Glastonbury 2022 is so exciting and such an unreal opportunity for us. I formed Pavey Ark back in 2016. Our first ever live performance was for BBC Introducing. I thought it would be really nice to have some violins on the two songs we were performing for the BBC. I contacted the University of Hull’s Music department to see if any of their students would fancy playing. We added two student violinists to our group then – including Chris Heron who has since graduated and remains a key member of the band. The addition of violins sounded so lush and shaped the sound of the band from then on.

“Many of our current string players are University of Hull Music graduates including Alex Simpson, Vicky Berry and Freya-Fletcher Tomlinson. Our band line-up changes and grows depending on what the gig is. For Glastonbury we’re including a three-piece brass ensemble featuring another two University of Hull Music graduates Kieren Iannidinardi and Sophie Iannidinardi.”

Alex Simpson studied Music at the University of Hull, is one of Pavey Ark’s core band members, and also works at the University as Creative Lead for the Marketing and Communications Department. He credits the connections and experiences he made during his degree in helping him get to where he is today.

Alex said: “I knew I wanted to study Music and when I was looking at universities, Hull felt right for me straight away. Everyone seemed really friendly and it just clicked, whereas other universities I’d visited didn’t feel like they were for me.

“Studying at Hull gave me extra opportunities to gain work experience – including being part of marketing committees for promoting ensembles and symphony orchestras that I played in as part of my degree. These experiences helped me secure a Marketing Internship at the University of Hull which I started a week before I’d even graduated – it was a fantastic kickstart to my career.

“Music in particular is about the connections you make. The Music Department always felt like a community to me – and it was through those connections that I first began playing with Pavey Ark. It’s incredibly exciting to now be playing at Glastonbury!

Neil added: “We can’t wait to show Glastonbury what an independent band from Hull can do.”

Pavey Ark played the Acoustic Stage at Glastonbury Festival 2022 on Friday June 24 at 1.40pm. The band released their new EP ‘Live at Middleton Hall’ on the same day.

Middleton Hall is a world-class concert hall, cinema and theatre space and just one of the state-of-the-art facilities available to students at the University of Hull campus.

Further information on studying at the University of Hull is available at www.hull.ac.uk and by attending the University’s Open Day

Further information on Pavey Ark is available on the band’s website www.paveyark.co.uk .