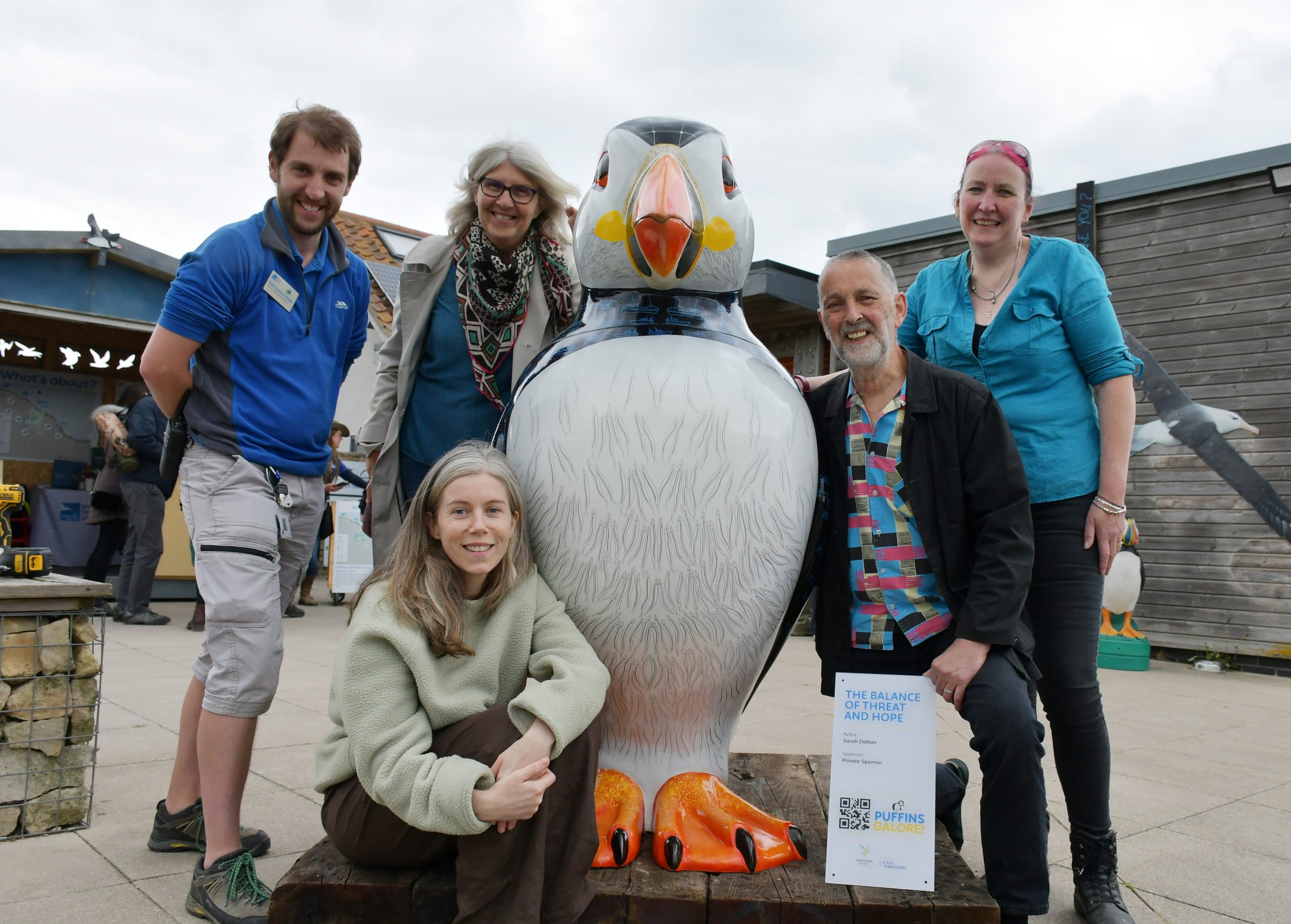 Hull-based artist Sarah Dalton (front) with her painted puffin at the RSPB centre at Bempton. Also pictured (from left) are Scott Davidson-Smith, visitor operations manager at the centre, and Glynis Charlton, Rick Welton and Clare Huby of Puffins Galore!

A public art event which makes puffins the stars of stories of conservation, global warming and green energy has taken off with the installation of the first sculptures in a trail stretching along the coast of East Yorkshire.

Organisers of Puffins Galore! placed the first sculpture at the RSPB Centre at Bempton, home to almost half a million seabirds which cram onto the cliffs every year. The second puffin was installed at North Landing, Flamborough, with another in the centre of the village and a fourth at Sewerby Hall.

From there the installation team from Hull-based Strata Group – one of the sponsors of the project – headed into Bridlington, where 10 sculptures will be displayed. During the rest of the week the remaining puffins will be delivered to coastal locations in Hornsea, Withernsea and Spurn Point as well as to inland sites at Patrington, Hull, Beverley and Cottingham.

On Saturday 2 July, once all 42 puffins are in place, the Puffins Galore! website will officially launch the trail by posting details of every location and pictures of every design.

Rick Welton, co-director of Puffins Galore!, said: “Seeing our puffins settling into their new homes is the reward for months of hard work by so many people involved in the project and we are immensely grateful to all of them.

“There’s the factory in Poland where a lot of the manufacturing had to stop because some of the workers are from Ukraine, the artists across the region who came up with some wonderful designs and fantastic paintwork, the sponsors who have supported the project in such difficult times and the delivery teams who have covered hundreds of miles dropping off plinths and puffins.”

Rick and Puffins Galore! project manager and co-director Clare Huby were both involved in the hugely successful Larkin with Toads in 2010 and the follow-up A Moth for Amy in 2016.

The initial investment and support was provided by key partner Yorkshire Coast BID and project partner Visit East Yorkshire with the aim of raising the area’s profile as a tourist destination.

Artists submitted more than 150 designs in response to a brief setting out three core themes of endangered wildlife of the coasts and seas, the global warming crisis and the growth of green energy, and people and stories of the East Yorkshire coast.

Sarah Dalton, who combines her work as an artist with a day job in the Solo Hair Salon in Hull’s Old Town, designed and painted the first puffin, “The Balance of Threat and Hope”, in close collaboration with a private sponsor who also worked with her on A Moth for Amy.

Sarah said: “The puffin was delivered to my house and just stood in the corner for a week and a half watching us before I got to it. I took a week off work and plugged away at it. I did some pre-experiments to capture what I wanted.

“I wanted it to look completely normal from a distance. Then, as you get closer to it, you see the line drawings coming through and the flecks of glitter reflecting the hidden message of human impact. During lockdown I struggled with creativity but the puffin project has given me some focus again.”

Saffron Waghorn, who is based at Skipsea, designed and painted “Migration ‘“The Dance of Life’”, sponsored by Jadan Press in Hull and placed next to the cafe at Flamborough’s North Landing. She also worked with students at East Riding College in Bridlington on their puffin, “Protect Our Mother Earth”.

Saffron said: “Mine is about the birds that migrate, such as swifts and swallows, and highlights how hard their life is and their journey to reproduce and survive. But it’s not just puffins, it’s all sorts of creatures that are up against global warming.

“If I wasn’t an artist I would be doing something around conservation, maybe breeding whooping cranes! I am all about wildlife and alternative energy. I live my life in an environmentally friendly way.

“I think this is the best project of its kind so far. The painting is phenomenal and the designs are out of this world. They really are fantastic and everybody has excelled themselves. There are artists who previously worked on the toads and the moths and who have built up their skills. You can see how they have grown through their careers, and there is a lot of passion because of the themes.

“I worked with five students at East Riding College. It took them a while to get into the idea of what was needed, what we were trying to achieve, but once the puffins arrived they were getting the paint out and I think they have addressed some of the very important issues behind the project.”

Sponsors and partners include businesses and other organisations from across East Yorkshire and further afield.

J R Rix & Sons, a sixth-generation family business with its roots firmly in East Yorkshire, is looking to the future by sponsoring two puffins – one in the name of its Victory Leisure Homes business and the other named after the Lagoon, the ambitious development to transform the waterfront in Hull.

Shirin Kemp of Victory Leisure Homes, said: “We’re delighted to be part of the Puffins Galore programme along with our parent company J R Rix & Sons. As a local family business, we wanted to help raise awareness of the importance of green energy and environmental issues, but also be part of this wonderful sculpture trail that aims to bring together families and the community.”

Paul Hatley, project director of Lagoon Hull, said: “East Yorkshire is incredibly lucky to be able to host such diverse wildlife and puffins are the jewels in the crown. With our own aims to provide space for nature to thrive as part of our transformative Lagoon project, supporting Puffins Galore! was an easy choice.

“We can’t wait to see our puffin greeting people in Hull, to share the beauty of the majestic seabird and let people know how they can add their name to the wave of support for Lagoon Hull.”

Rachel Smurthwaite of Sewell on the go, which has placed a puffin in the centre of Cottingham, said: “It was important to us that our teams were involved with Puffins Galore! from the very start, so we put the designs to a vote – staff from our 13 stores across the Humber region helped choose which puffin design we’d support.

“As a local company, we think the puffins are such a great way to promote the region. The seaside is a huge part of East Yorkshire’s culture, of which many of our team members have fond memories resonating with this puffin in particular. The design is so eye-catching and the colours are beautiful – we can’t wait to see it completed!”

The City Healthcare Partnership (CHCP) in Hull sponsored “Don’t be a Dodo”, which was designed by Josh Ibbotson and The Junior Design Factory in Hull and will stand at Seathorne in Withernsea.

Lucy Flower of the CHCP said: “We love Josh’s design! It’s colourful and beautiful but also has a serious educational message about the evolution of life on our planet. We are so excited that this will be a CHCP Puffin.”

Clare Huby said the puffins will remain in place until the end of October before being sold either to their sponsors or at a grand charity auction which will raise funds for Hornsea Inshore Rescue, Yorkshire Wildlife Trust, RNLI and the RSPB.

Clare said: “Having worked on Larkin with Toads and A Moth for Amy we know how much the public enjoy animal sculpture trails and we’re bracing ourselves for an exciting week and a social media frenzy as people see the puffins in their new homes.

“We’re confident people will take to the highways and by-ways of East Yorkshire to track down the puffins, take in some of the region’s tourist attractions and swamp us with selfies!”

Kerry Carruthers, Chief Executive of Yorkshire Coast BID said: “Being able to support projects like Puffins Galore! that make art and education about wildlife accessible for people of all ages along the Yorkshire Coast is fantastic!  The talent involved in designing the Puffins alone is worth celebrating, and we encourage everyone to make the discovery of these a must do activity this summer.”

Councillor Jane Evison, East Riding of Yorkshire Council portfolio holder for economic growth and tourism, said : “I am delighted that Visit East Yorkshire is a project partner in this exciting Puffins Galore initiative, celebrating an iconic feature of the East Yorkshire coast, and helping to boost tourism still further. This is a great idea, and these giant puffins add a whole new dimension to a trip to our wonderful resorts and attractions. I feel sure they will bring many visitors to the area.”

To find out more about Puffins Galore! and to download the puffin spotter’s guide and other information which will go live on Saturday 2 July please visit http://puffinsgalore.co.uk/