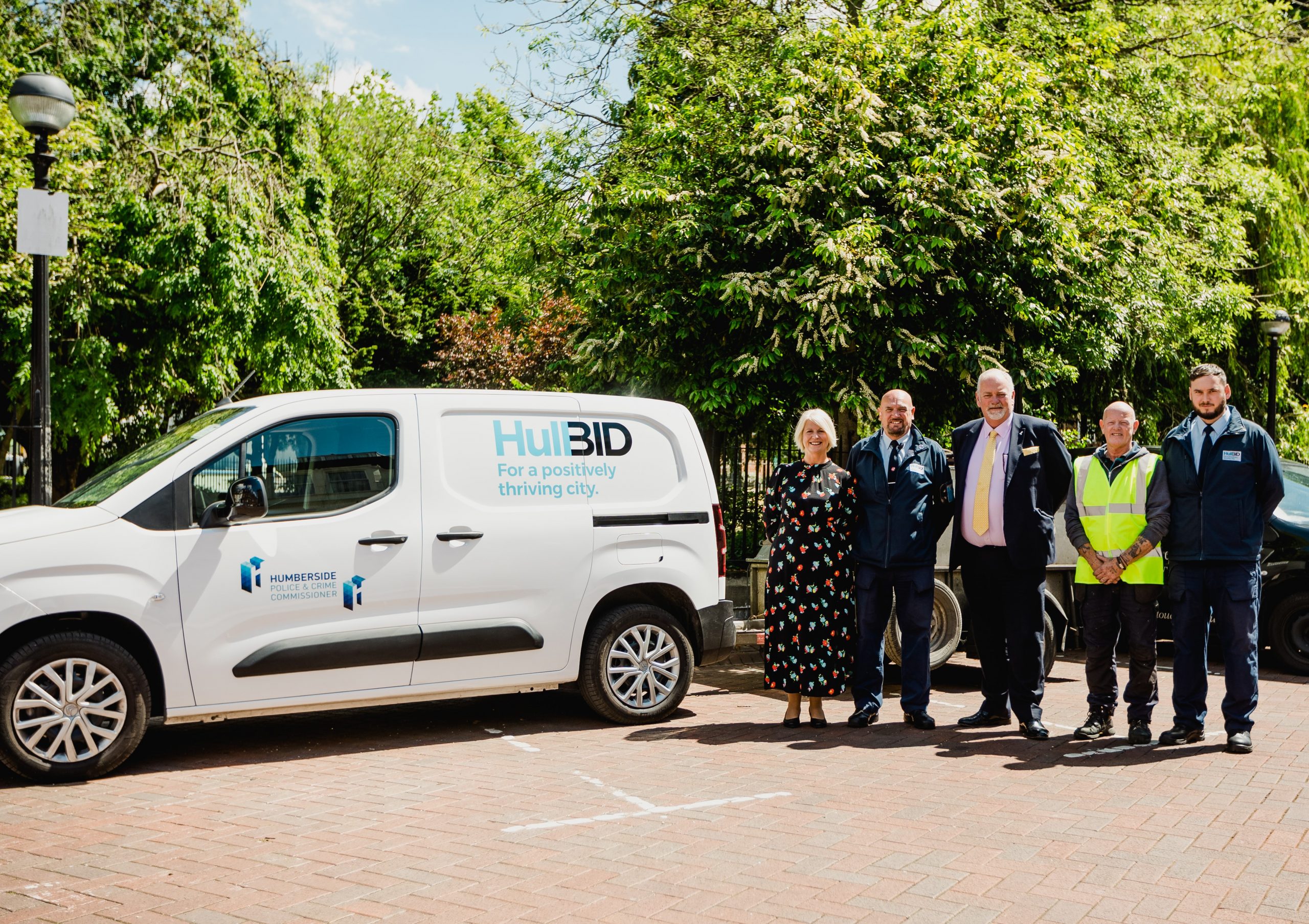 HullBID has been handed a major boost to its comprehensive street cleaning programme with significant funding from the Humberside Police and Crime Commissioner.

Jonathan Evison, who underlined his support for HullBID soon after he took up his role during 2021, has provided a grant to cover the cost of a new van and jet-washing equipment.

Jonathan said: “An important part of living and working in any town or city, and for those who visit it, is for people to feel safe and secure. A clean and tidy environment is vital to achieve that.

“I am pleased to have provided funding for this vehicle for the next three years to assist Hull BID in reducing vandalism and anti-social behaviour which will improve the look and feel of the city centre.”

Martin Foster, HullBID’s cleaning and cleaning maintenance operative, takes on around 1,500 tasks every year and is usually hard at work from very early in the morning, long before most businesses have opened their doors for the day.

He does the jobs that are not part of Hull City Council’s remit, from removal of graffiti, which is now rarely seen in the city centre, to the assorted waste hidden in the alleys, alcoves and doorways around the city centre.

Martin also carries out a variety of painting assignments to help businesses keep their fences and frontages looking smart.

Pat Coyle, Client Services Director for Rollits LLP, said: “As more people are returning to their workplaces it’s important that they see the city centre looking clean and welcoming.

“The same goes for the events programme operated by HullBID and various other organisations. If people see a nice, clean environment when they arrived in the city centre for events such as Hull Street Food Nights, the Yum! Festival and Humber Street Sesh they’re much more likely to make a return visit in the future.”

Howard Hewitt, Co-owner of Furley & Co, added: “Martin does a great job and we love him in Princes Dock Street. He gives the area outside the bars a thorough clean twice a year and he responds very quickly to clean up any graffiti and other mess.

“I’m pleased to see HullBID has secured some support for a service which provides a direct benefit for city centre businesses.”

Kathryn Shillito, HullBID Executive Director, said: “Martin was particularly busy when it came to helping city centre businesses prepare to reopen after the series of lockdowns.

“He was jet-washing shop fronts and outdoor seating areas ready for returning shoppers and revellers. His normal working day has a very early start and most of the time he has cleared any mess before the business owners and their staff are aware there was a problem – he leaves a card to tell them he has called!

“The funding from Jonathan will help Martin to deliver an even more efficient service. He’s now equipped with a powerful jet-wash machine and a new van which is also used for transporting materials for our busy events programme.

“We’ve found Jonathan to be a great ally in many ways since he was appointed as PCC, we are extremely grateful for his support and we are already working with him on plans for some new projects.”

University of Hull celebrates their partnership anniversary with Team GB by announcing Max Whitlock, double Olympic champion, will be their lead Ambassador