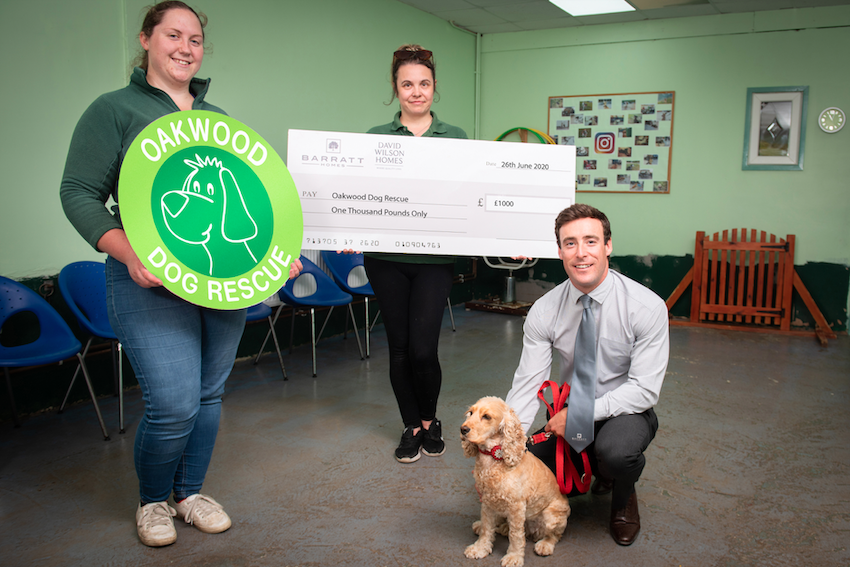 14 July 2020: Local housebuilder, Barratt Developments Yorkshire East, continues to support the communities in which it builds, by donating a total of £1,000 as part of its Community Fund scheme to Oakwood Dog Rescue, in Hull.

Oakwood Dog Rescue was set up in 2009, initially to support people who could no longer take care of their dogs for any reason. The Registered Charity has since grown, and now rescues dogs from across the UK and abroad. Based in Hull on Sutton Fields, near Kingswood, the charity is now assisted by a dedicated team who works tirelessly to take in, assess and re-home as many dogs as possible.

The charity was nominated by Gary Tate, Assistant Site Manager at the Barratt Homes’ Barley Fields development, in Barlby. Gary joined Barratt Developments Yorkshire East in 2018 through its award-winning Armed Forces programme, launched to help support ex-military personnel who are keen to begin a career in housebuilding. The programme teaches essential construction skills, people management and self-development, building on existing skills gained during various careers within the Army, Navy or RAF.

Gary commented: “On leaving the Army, I experienced how different and lonely civilian life can be, until I discovered a wonderful little place, Oakwood Dog Rescue. I began to volunteer as a dog walker and realised how soothing and rewarding it can be to give homeless dogs a bit of love and fun. Although the dogs gained something from it, I think I benefited more, as I developed more confidence and happiness. The dogs definitely helped me with the transition from military life. For this, I am very grateful and wanted to give something back, which is why I nominated the charity for the Community Fund donation.”

Gill Williams, Founder at Oakwood Dog Rescue, commented: “We are extremely grateful to Barratt Developments Yorkshire East, for its donation of £1,000 and to Gary for his kind nomination. As a privately funded charity, we rely heavily on public support and fundraising so this money means a great deal, both to the team at Oakwood Dog Rescue, and most importantly to our dogs. Our goal is to rehabilitate and re-home as many dogs as possible to loving homes, where they can live out the rest of their years in a happy environment. Gary’s story is inspiring, and highlights the life-changing impact a dog can have on someone’s happiness and well-being.”

Daniel Smith, Managing Director of Barratt Developments Yorkshire East, commented: “We are always looking for ways that we can support the communities in which we build, so we’re thrilled to have been able to support Oakwood Dog Rescue with our Community Fund. After reading Gary’s nomination, it was clear that the charity plays an integral role within the Hull community, both in supporting vulnerable dogs and providing much-needed companionship for those actively involved with the charity.”

If you would like to nominate a local charity or organisation to be considered for a donation, then please send your name and details to louise.gamp@barratthomes.co.uk

Hull’s Rose Bowl will flourish this summer despite coronavirus