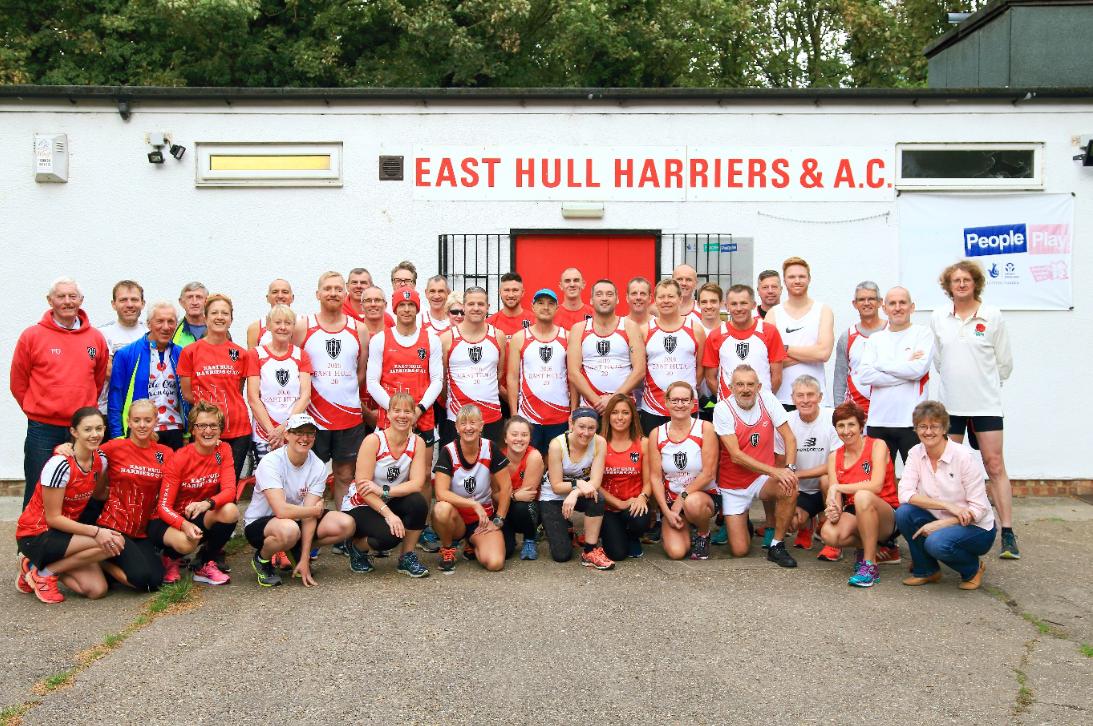 When I was a teenager, my brother Alan was a sports fanatic and still is. He was a scrawny kid and I always envied his skinny legs which I put down to all the running he did. East Hull Harriers was the club of choice for him and I would like to jog you down memory lane with some history about it.

Pubs and the Club

Back in 1893 under the name of Holderness Road Presbyterian Harriers, their Headquarters was a Schoolroom in the Church at 336. Although most of the Church was pulled down in 1972, the Schoolroom became part of what was the Green Man Public House. The first President of the club was the respected Vicar of the Church, the Rev H.P. Slade.

In 1908 the Club changed its name to the East Hull Harriers (nicknamed the All Whites due to their club kit colour) and moved their base to the Crown Inn on Holderness Road, this was formerly known as Mile House or sometimes Mile End as the Inn was exactly a mile from the Town Centre.

At the Crown Inn, the 20 mile road race originated. A bold step as far as The Northern Athletic governing body of the day was concerned, but sadly only ran for 2 years, probably cancelled out of respect for Fred Rumsby who died (1909)while competing in the 2nd year. He won in its first year! Even now, the club doesn’t extend the 20 mile distance for their organised runs.

During the early 30s to the 50s, the club house was moved and erected by the runners themselves to Holme Oak Farm in Sutton. This land was leased from John William Hakeney, a pig breeder who lived on the High Street in Sutton. His granddaughter Avril, wife of the late George Smith was a staunch E.H.H. for 20 years (1960s to 1980s). It’s present site is in the Paddock part of the Sutton Park Golf Complex, the land now being leased by The Hull City Council.

It wasn’t till the early fifties that the Club staged another 20-Mile race, this was organised by John George Easey. The Club introduced their first Club Cross Country Championship, and the members raised enough money to purchase The Members Cup, it’s first winner was F. K. Bentley. Joe Bullamore was the first athlete to win the trophy three times on the trot, the most prolific winner of the trophy with six to date is, Peter Moon a versatile performer who won the Northern Counties 3Km Steeplechase in the 70’s. Previously the Club Championships had been staged on the road, from the Crown premises to the Chapel in Bilton.

In this year the Club changed its white vest to red. Ben Hooson was probably the first Club athlete to try Ultra distance and took part in the Butlin Walk 1960 Land’s End to John ‘0’ Groats’.

The 1970s saw the completion of a permanent building, built by Bill Edwards, a former Club Champion. The new HQ was opened by Dave Slater, International Cross Country Runner and soon after this, ladies were welcomed to join the club. In the 1980s weight training facilities were provided and the Club staged its first 24 Hour Track Race at the Costello track and now the 24 hours has grown to be a major event in British and European Ultra Running.

However, it’s on the road where the most promotions have been staged, the Open 20 Mile is held 5 weeks before The London Marathon. The Major G. H. Stone Half Marathon and Summer League races are all well-established, and coupled with the 3 mile East Park Fun Run a year the Club caters for all standards. The winter league runs from October to Easter.

The Club has hosted the Northern & Yorkshire Cross Country Championships on the Beverley Westwood and the first athletic event over the Humber Bridge with an Open 10 mile race. In more recent times the Club was one of the few North Bank Establishments who were prepared to keep the Humber Bridge Marathon race going when finances dwindled. Committee members work hard alongside the Council to ensure it continues.

During 2018 many members set lifetime best performances at various distances, several exceeding even their wildest dreams.  There are too many to list all, but three male members broke the 2hrs 30min barrier for the marathon distance and finished high in the rankings in very large fields.

As a result, Rob and Steve were selected to represent England in a Home Counties event incorporated into the Chester Marathon.  They finished 5th and 5th respectively, recording 2:29:02  (Rob) and 2:29:08 (Steve).   Steve is now number 1 ranked male over 45 in Great Britain for the marathon.

Too many famous people have links with the club on their way to stardom for a mention here, so please check out their Facebook page with over 12,000 members. Web site can be found at easthullharriers.com

E.H.H. has fun times too with presentation nights throughout the year.

May 2018 saw a glitzy Centenary Gala Dinner at The Guildhall with 200 people in attendance.

There are only 7 running clubs in the Hull area and East Hull Harriers welcomes adults, who can run 3 miles (pace not an issue) to become members. The annual cost is £42.00 and this includes registration with England Athletics Club. There is also a monthly newsletter. For more information contact Richard Alsop on 07595 015841.

Why taking care of your mental health could have physical benefits.