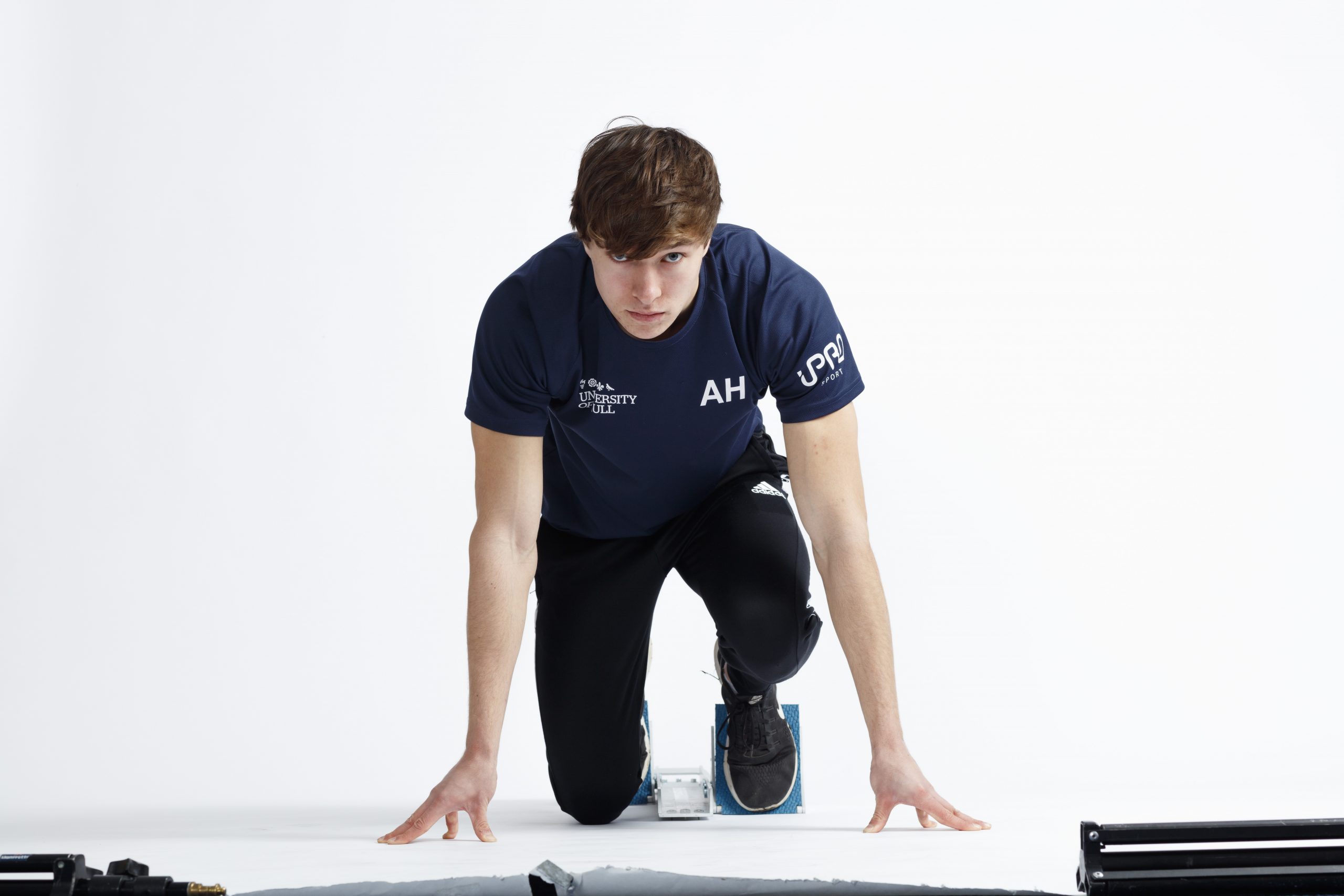 University of Hull graduate Andrew Morgan-Harrison has his sights set on the Olympic Games this summer as he aims to be in the 200m starting blocks in Tokyo.

Andy, who graduated from Hull last year with a First-Class degree in Sports Rehabilitation, won gold at both the 2020 British Indoor Championships and Outdoor Championships, and last month represented Team GB at the European Athletics Team Championships in Poland.

The East Yorkshire sprinter is a Talented Athlete Programme recipient at the University, and is now in the final stages of training for the Team GB selection event for the 2020 Olympic Games.

Andy said: “I started running when I was around 11. I used to always win sports day events at primary school, and one of my teachers said I should get myself in with a club.

“I was coached at Costello Stadium in Hull, and ran throughout secondary school and college. I’d already applied to study at Hull when one of my friends told me about the Talented Athlete Programme, so I applied for that and was lucky enough to be accepted.

“During my first year at Hull, my running performance had a massive jump up, and I won my first British medal in the 200m event.”

His time – a remarkable 20.66 seconds – meant he was top of the European standings, and the third fastest student in the world.

The Talented Athlete Programme offers a range of benefits and support packages for recipients, which includes:

His performance in the 200m event helped Team GB finish third in the overall standings at the event. Andy will later this month travel to Manchester for the selection event for the Olympic Games in Tokyo.

“They will select three athletes for the 200m, and there’s some seriously quick guys at the moment,” Andy said.

“You’ve got big names like Zharnel Hughes, Miguel Francis and Adam Gemili. I know I can run faster than what I have done before, so I’m hoping I can go there and catch a few of them by surprise.

“Being selected for the Olympics would be a childhood dream come true. Ever since I was little, and used to go walking with my gran and her dog, she would time me running between lampposts along the way, and I’d try and beat that time. I’ve always had that competitiveness.”

Andy graduated from Hull with a First-Class degree in BSc Sports Rehabilitation.

He managed to balance his university studies with training and competing at elite-level sporting events.

“The University was great with me the whole time I was there,” Andy said.

“I had to have one of my exams moved to a different date, because it clashed with when I was out at a warm weather training camp with my coach. The University was brilliant about it all.

“The Talented Athlete Programme has helped me a lot in recent years. Having free access to the gym was one of the biggest benefits, and the University also supported me with training and diet plans.

“It is definitely something which needs to be shouted about more. I would recommend it to anyone.”

You can find more about the University’s Talented Athlete Programme here.

Sporting prowess runs in Andy’s family. His brother, David, is currently studying Physics at the University of Hull, and is himself a talented 100m sprinter.

The University of Hull is an official partner of Team GB – incorporating both the Tokyo 2020 and Paris 2024 Olympic Games, and the Beijing 2022 Olympic Winter Games.

The partnership provides opportunities for the University of Hull’s students, staff and communities, including participating in Team GB events, developing courses, guest speakers and CV-boosting opportunities such as work experience and volunteering.

More details on the partnership can be found here.

Children given VR tour of Hull Hospitals ahead of appointments