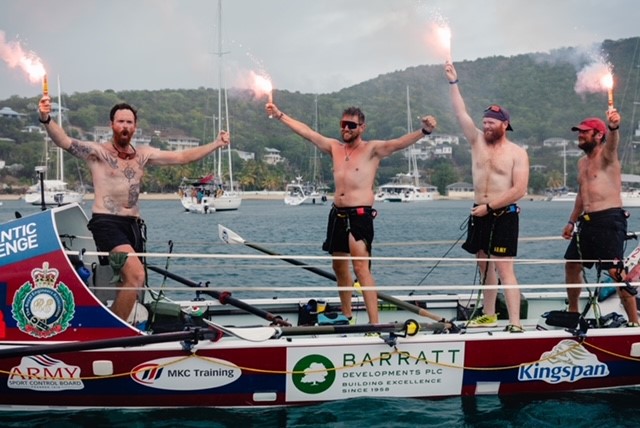 Four serving Royal Engineers, dubbed the Salty Sappers, have just rowed 3,000 miles across the Atlantic Ocean to raise funds for The Royal Engineers Association and the Royal British Legion Industries.

The team competed in the world famous Talisker Whisky Atlantic Challenge, doing a gruelling rota of two hours of rowing followed by two hours of rest for 39 days. They endured all that the Atlantic could throw at them, including enormous waves crashing into the boat, sea-sickness, blisters and extreme fatigue.

The Salty Sappers, who are sponsored by Barratt Homes, endured the Atlantic Ocean from La Gomera in the Canary Islands to Antigua in the Caribbean as part of Project Atlantic Ubique.

Captain Josh Warne, a Salty Sapper crew member from Devon, said: “The scale of the challenge was huge. It was a mixture of long periods of high repetition as we rowed for two hours, followed by boredom during the rest periods. This was interspersed with bits of terror with huge seas, and then during the nights when it was calmer, we saw bioluminescent seas and amazing wildlife.

“We want to say thank you to Barratt and our other sponsors. Without their support, we wouldn’t have got to the start line. While we were away at sea, it was really heartening to know that people at home were following our journey as well as donating huge amounts of money to our amazing charities.”

Unable to say no to a challenge, Josh has previously completed a self-supported 250km ultra-marathon across the Atacama Desert in Chile and the 125-mile Devizes to Westminster Canoe marathon. Chris Watson, a Regimental Sergeant Major from Burton-on-Trent, has served in Iraq, Afghanistan and Northern Ireland. He brought the right blend of competitiveness, determination and sense of humour to succeed.

The third member of the team, Plymouth-born Tim Ives joined the Army in 2002, after training at Sandhurst he was commissioned into the Royal Engineers completing tours in Iraq and Afghanistan. The final member of the crew, Chris Hayto from Manchester, was posted to 21 Engineer Regiment in 2012 as a Sapper and has undertaken Operational deployments to Afghanistan, Somalia and Iraq.

David Thomas, CEO of Barratt Developments, added: “At Barratt, we are incredibly proud of the work we do with the Armed Forces community, from our Armed Forces Transition Programme, which helps ex-Armed Forces personnel train to become Site Managers, to our partnership with the Royal British Legion Industries and the Tommy Club. The Salty Sappers have really put their bodies on the line to raise much-needed funds for these charities and we were delighted to support them.”

The team has so far raised more than £16,000.  There is still time to donate, which you can do so via their JustGiving page!