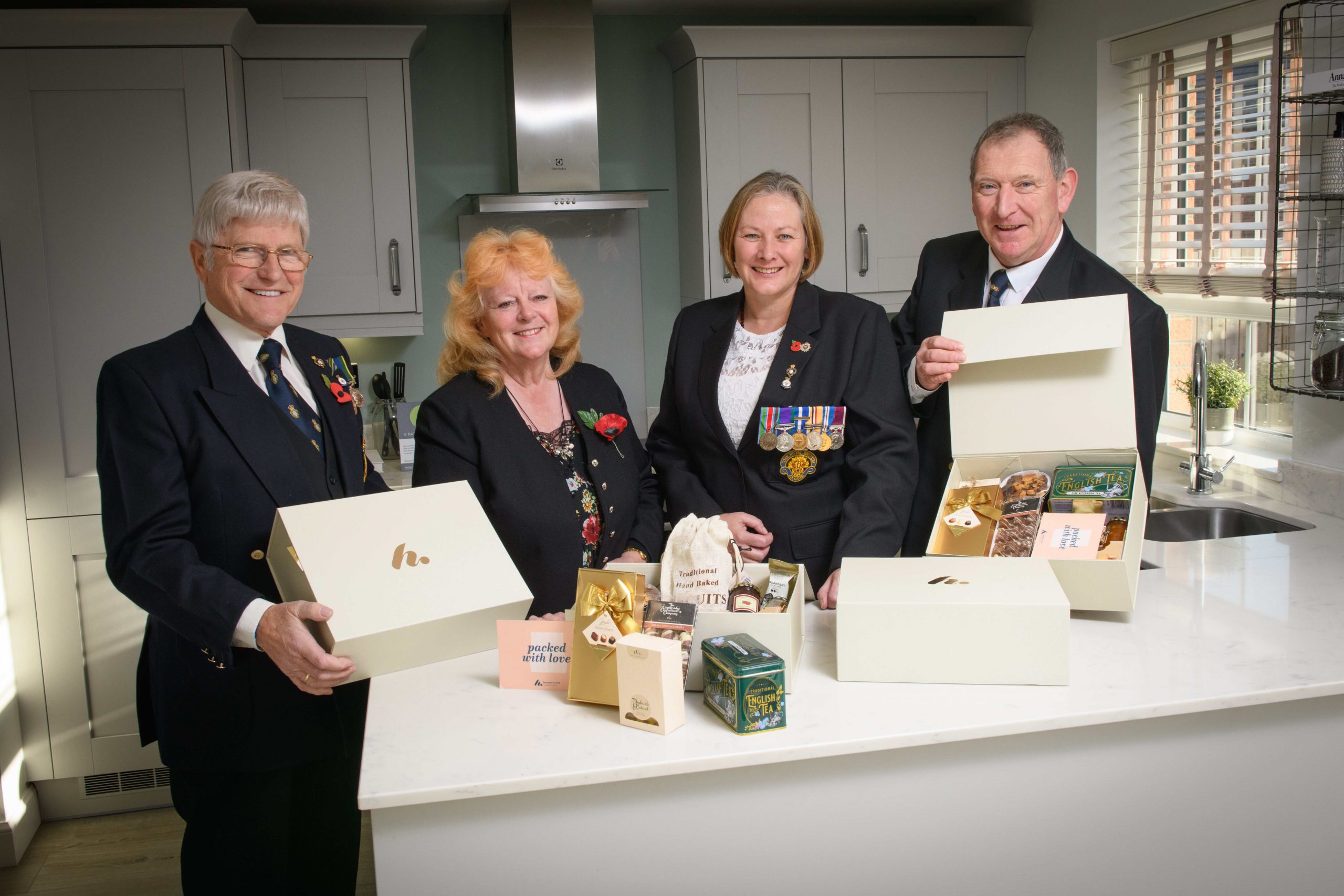 Barratt Developments Yorkshire East is honouring war veterans and volunteers from the Cottingham branch of The Royal British Legion, by donating gift hampers to the volunteers that deserve an act of kindness most this Remembrance Day.

To mark Remembrance Day on the 11th November, and to say thank you to the volunteers of the Cottingham branch of The Royal British Legion for their dedication and continuous hard work, Barratt Developments Yorkshire East has donated an act of kindness to four committed members. The gesture will see the selected volunteers each receive a gift hamper that contains a selection of treats and nibbles from jams to chocolates, crisps and coffee, in recognition of their work in the local community.

Volunteers Christine Buckle, Mike Dobson, Sonia Greaken and Jerry Cross have each made an outstanding contribution in their varying roles from loyal volunteers to treasurer and chairman.

Partners Christine Buckle and Mike Dobson have both made significant contributions to the work of the branch this year. Mike is a regular standard bearer for the Royal Engineers and assists the Cottingham Branch when requested to attend funerals of veterans and civic events on behalf of the Royal British Legion. Christine and Mike make a significant contribution to the fundraising efforts of the branch and between them have organised, advertised and raised funds for a social event for the more senior members of the community.

Treasurer of the branch, Sonia Greaken, has spent significant hours planning the distribution of the poppy collection boxes as well as managing the Royal British Legion, Cottingham branch’s accounts effectively and has breathed new life into the production of advertising and ticketing for events, in order to increase the funds raised. Her partner, and Branch Chairman, Jerry Cross, attends events across the country on behalf of the branch and aims to grow the branch to provide support to as many veterans as possible.

Both Sonia and Jerry have completed full time careers and now continue to serve in the Reserves whilst simultaneously supporting the Cottingham branch of the Royal British Legion.

The four members were invited down to local Poppy Fields development on Harland Way, in Cottingham, to receive the gift hampers and tour the site that includes street names that represent local wartime history, such as Jack Harrison Avenue, named in memory of the fallen Hull hero.

Paul Hogan, Sales Director at Barratt Developments Yorkshire East, commented: “It’s an honour to highlight the important work that The Royal British Legion does, and we wanted to contribute these gift hampers as acts of kindness to spread happiness amongst the dedicated team at the Cottingham branch of The Royal British Legion, as well as shine a light on the continuous devotion they have as volunteers to the branch.”

Jerry Cross, Chairman of the Cottingham branch of The Royal British Legion, commented: “We’d like to thank Barratt Developments Yorkshire East for their continuous support. The acts of kindness have boosted morale after the uncertain times we’ve had recently at the branch, but we continue to dedicate ourselves to the cause and offer support to our veterans where possible.”