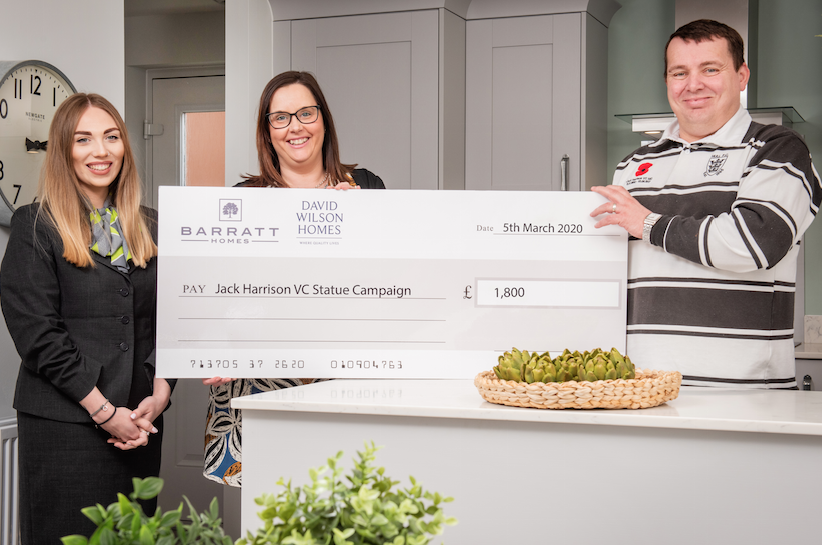 Five-star housebuilder, Barratt Homes Yorkshire East, continues to honour fallen war hero, Jack Harrison, at its aptly named Poppy Fields development in Cottingham, with a £1,800 donation toward a statue in his memory.

The recent contribution to the Jack Harrison statue has been raised by Barratt Homes through an ongoing pledge to donate £100 for each new home sold at its Poppy Fields development in Cottingham between Remembrance Sunday and Christmas in 2019, combined with a £1,000 donation from the business’ Community Fund scheme.

The Poppy Fields development, where the fundraising took place, was respectfully named with the World Wars in mind – taking inspiration from the famous war poem In Flanders Fields. To further amplify the sentiment behind the development, a group of students from Cottingham High School were invited to name the streets researching local wartime history, war poems and Hull veterans to inspire their suggestions. Amongst the names chosen was Jack Harrison Avenue, named in memory of the fallen war hero.

Jack Harrison, who was born in 1890, was commissioned as Temporary 2nd Lieutenant in August 1916. Harrison was twice recognised for bravery, receiving the Military Cross in February 1917 for leading a patrol into no-man’s land on the Western Front of the Battle of the Somme, and a Victoria Cross for his self-sacrifice at Oppy Wood in May 1917.

In celebration of Hull’s treasured war hero, Ian Judson, playwright and Manager at Jack Harrison VC MC statue campaign, has written the chronicles of Jack Harrison’s life, An Ordinary Hero. The funds raised from the performance have been donated towards the statue, which will be situated in the heart of Hull.

Ian Judson commented: “I’d like to thank Barratt Homes Yorkshire East for its generous donation and ongoing support to the Jack Harrison VC MC statue campaign. We hope to continue raising funds and aim to have the statue in place by 2025 to act as an ever-lasting tribute to the life of Jack Harrison. It’s so important to remember those who have served and sacrificed to defend our freedom to help pave the way for a peaceful future.”

Linzi Bentley, Sales Manager at Poppy Fields commented: “I had the pleasure of meeting Ian Judson last year, to mark Remembrance Sunday at Poppy Fields, so it was lovely to see him again and hear more about his plans to honour Jack Harrison both in the statue and his future work. We continue to support the local community wherever possible, and it will be fantastic to see the statue when it’s built”.

Parents and carers of young children may be entitled to receive Healthy Start vouchers.