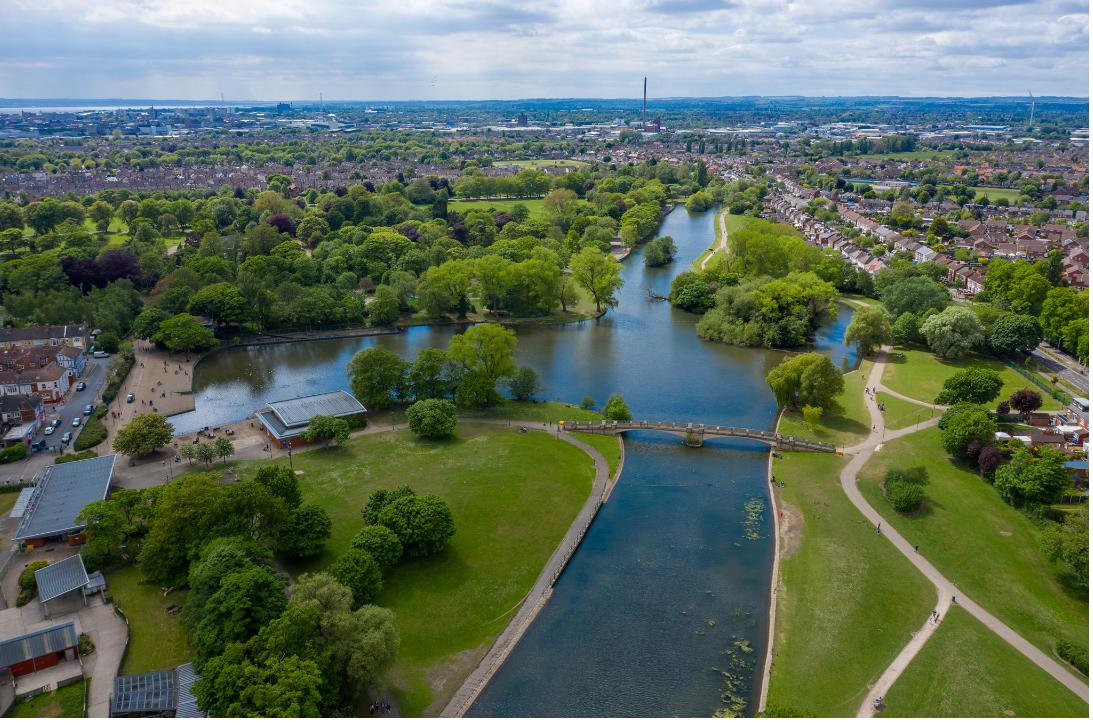 East Park lies about two miles from the city centre on Holderness Road. It originally covered an area of 52 acres but gradually expanded. Today there are 130 acres of parkland and the park is often used for large open-air venues such as concerts, military shows, car shows, firework shows and the annual Hull Show

East Park was designed by Joseph Fox Sharpe. It was originally meant to mirror Pearson Park in Hull with land adjoining the carriage drive being developed for housing but this did not happen. The construction of the park provided over 140 jobs in a time of high unemployment.

The western half of East Park was first opened to the public on 21st June 1887 to celebrate Queen Victoria’s Golden Jubilee. Large crowds lined the route of a parade which marched from the city centre.

The main entrance to East Park lies on Holderness Road. A park keeper’s lodge was added in 1902 which was designed by Joseph Hirst the City Architect. In 1949 a dance hall was built east of the main entrance and in 1964 the main entrance gates were removed and replaced with a concrete gateway.

In 1913, Thomas Ferens donated land for the boating lake which linked the park with the adjacent King George V playing fields. The lake was extended in 1923 and dug out by unemployed locals. It is a haven for wildlife, boaters and anglers.

The park catered for activities such as football, and cricket and boating.. There was a model yacht pond (1926) a boathouse, a bowling green and a Veterans Pavilion (1958). Six tennis courts were created to the west and east of the ornamental gardens in 1925 and 1929 and there was also a conservatory and an aviary (1928). During World War Two a barrage balloon landed on the tennis courts severely damaging the greenhouses.

In 1900 a ‘children’s mound’ was created in the central section of the park with rockwork and tunnels. A children’s playground was built in the 1930’s. An open air swimming pool was built for boys in 1913 and for girls in the 1920’s. A lido replaced these in 1964 but was later demolished and replaced with The Woodford Leisure Centre which opened in 1985. This has recently been refurbished.

The popular Wicksteed Splash Boat ride opened in 1929 and has brought pleasure to generations of people. For one penny there was a climb of 22 feet to the top of the tower. This was followed by a water ride of nearly 100 feet down into the lake which landed with a big splash. This is one of the last remaining Wicksteed Splash Boats in the country and is Grade 11 listed.

The central ornamental rockwork known as the Khyber Pass was designed in the late 19th century. It is thought to be the largest artificial rock work in a park in the country. The large chasms represented mountainous terrains linked by a bridge. This bridge has now been restored.

An Arab doorway from the Great Exhibition of 1851 is no longer there and the two Coade stone roundels at the western entrance are from Suffolk Palace, the De la Pole family mansion which once stood opposite St. Mary’s Church in Lowgate, Hull.

The watch tower from The Citadel garrison was placed at the entrance to the Khyber Pass in 1912. In 1998 it was returned to a reconstructed part of The Citadel in Victoria Dock near to The Citadel’s original site where The Deep now stands.

By the 1950’s the 1887 bandstand and the conservatory had disappeared and the small serpentine lake and the Peter Pan Lake were filled in. In 1960 the paddling pool was also filled in. In 1963 a small zoo was introduced into the park on the site of the irregular shaped lake.

A memorial garden has recently been created in memory of Mick Ronson a famous guitarist from Hull who played in The Spiders from Mars, David Bowie’s backing band. This memorial was unveiled on 2 June 2017.

This Grade 11 listed park recently benefited from a £10 million council assisted lottery grant and has been transformed. The Wicksteed Splash boat, The Victorian Khyber Pass, the original maze and the Valley Ornamental Gardens have all been restored. There is also a new giant walk-through aviary, an animal education centre, a boat house and a community pavilion.

Garden Village is a model housing village built mostly for the workers of Reckitt and Sons and situated in the Summergangs area of Hull. It was built on 130 acres of land by the Hull Garden Village Company. James Reckitt, a Quaker industrialist, contributed two-thirds of the £200,000 capital and two-thirds of the housing was reserved for his workers. Most of the land was purchased from Holderness House.

The design of this village was similar to that of other Garden Villages such as Cadbury’s Bournville. The aim was to provide houses for employees with gardens in a scenic environment for the same rent as inferior houses with no gardens.

Garden Village opened on 2nd July 1908 with houses linked by gardens and with tree lined avenues named after trees and shrubs.  600 houses had been built in five sizes with twelve different styles by 1913. A second phase of development began in 1923.

Five grades of housing reflected the position of the employees. For example, the detached and semi-detached houses on The Oval and Village Road were the first grade managers’ houses. The rents varied according to the size of the houses. Facilities included a club house (1909), a village hall (1910), shops with a library, a hostel for female workers and some rent free almshouses for retired workers. There was also a children’s playground and a village green (The Oval) for activities such as tennis, bowls and croquet

During World War Two the area was badly bombed. The worst hit houses were rebuilt but the Village Hall was destroyed and was not replaced.

At the bottom of the gardens of 42 to 80 Village Road was an avenue which was once a shady walk in the Holderness House grounds. Here stood two iron gates set in two stone arches. These stone arches were brought from Newark Castle and were said to be 800 years old. The arches were donated to Hull Council and removed to East Park to be built as rocks.

In 1950 the Garden Village company was disbanded and some houses were sold to tenants. The Bradford Property Trust bought the estate. For a nominal fee the open spaces known as ‘The Oval’ and ‘The Playground were transferred to Hull City Council. In 1970 the area became a designated conservation area and many of these buildings and houses are now listed buildings.The club house is now a popular community centre catering for all ages.

Summergangs Hall was built on fields in the Summergangs area after enclosure in 1748. This large residence with grounds was built on Holderness Road. It was modernised in 1800 by John Kirby Picard, an attorney and Deputy Recorder of Hull. Apart from Summergangs Hall, the area remained free of housing until the 1850s. In 1838, Boswell and William Jalland, leading Liberal Party members bought the estate. They demolished Summergangs Hall and built Holderness House.