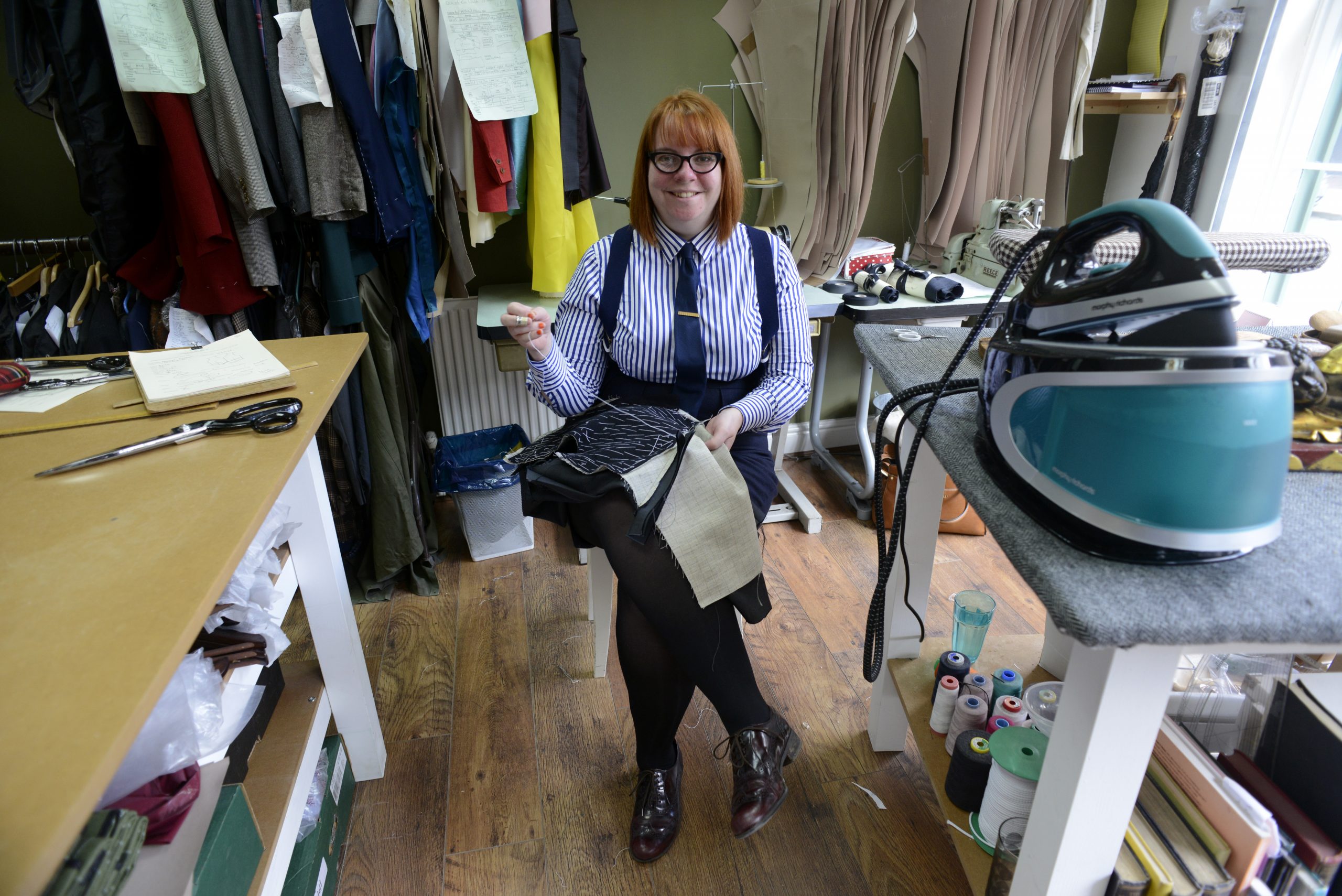 A Savile Row-trained tailor has turned her talented team and their mean machines over to making much-needed PPE after cutting through the red tape of NHS procurement.

Gill Long, owner of Cock of the Walk, is confident of producing 250 surgical gowns a day with her international staff of six working variously from home and from their tailors shop in Grimston Street, Hull.

The gowns are disposable, but Gill is also working on a prototype for a new, washable surgical gown and will begin tests when she receives an 80-metre roll of cotton fabric from her supplier in Huddersfield later this week.

Gill opened Cock of the Walk ten years ago after working in London and Manchester. She built a strong client base with orders for weddings and other special occasions, including the official, handmade attire for the new High Sheriff of the East Riding, Andrew Horncastle.

But as the coronavirus crisis cut into her orders, Gill tried to find PPE work for her team of eight, who include tailors from Latvia, Poland, Russia and Spain. After five weeks of false hope and fools errands, Gill spoke to contacts in the Hull business community and was introduced to Hull North MP Diana Johnson, who made the vital introduction to senior management at Hull Royal Infirmary.

Gill said: “It was clear to me early in March that work was slowing down so I punted the idea on social media that this country still has a pretty good textiles industry and we could have a go at making what was needed.”

The British Fashion Council contacted the Cabinet Office and invited top tailors from around the country to send details of their skills and equipment, but nothing happened.

An initial approach to Hull Royal Infirmary brought the response that procurement rules wouldn’t allow Cock of the Walk to supply anything. Another major Yorkshire hospital told Gill they would take her products if she bought the materials.

Gill said: “As a small business we just couldn’t do that. The NHS has money but couldn’t get the products. We can make the products but we haven’t got the money to pay for the materials as well. We also wanted a clear specification because we’re aware that well-wishers have been sending hospitals their own attempts at PPE which just aren’t suitable and are going straight in the incinerator.”

Gill said: “The team at HullBID told us that the MPs were eager to hear about the experiences of local businesses in dealing with issues around coronavirus. I’d given up by then but I wrote to the MPs to get everything off my chest. I told them what had happened and how frustrated we were. Diana replied within about half an hour and asked if it would be OK to pass my message to her contact at Hull Royal Infirmary.”

Someone from the hospital contacted Gill on Saturday, a bundle of fabric was dropped off at her shop on Sunday and was tested in the sewing machines before she cut the patterns for three sizes of gown ready for making prototypes for checking on Monday for fit, functionality and quality.

Gill said: “It’s been a huge effort trying to get people to understand what we can do and tell us what they need. Now we face a massive mountain of work with 250 disposable gowns a day and a prototype for the anti-bacterial finished cotton that will be tough, durable and washable.

“We’ve got two people in self-isolation but three on machines, me and an apprentice on trims, the sales guy on quality control and my dad and a customer as couriers. We’ve found someone from East Riding College to come in and do the cutting for us. We’re in familiar territory now, working with our own tools on our own machines.”

Kathryn Shillito said: “The discussion with the MPs was all about how the economy is struggling because of coronavirus and we took that opportunity to highlight some of the issues facing businesses in Hull city centre, but when we spoke to Gill we also thought it might be helpful to put her in touch and we’re absolutely delighted that Diana found a way to help a terrific local business provide a much-needed service.”

Diana Johnson added: “I was just very glad to help in a very small way.  Just before Gill emailed me I had been talking to the local NHS about shortages in PPE and so as soon as I received Gill’s  email it felt like serendipity! I was really frustrated that Gill had not been able to make any progress after her generous offer to help produce PPE so I am delighted that it looks like Hull NHS staff will now benefit.”