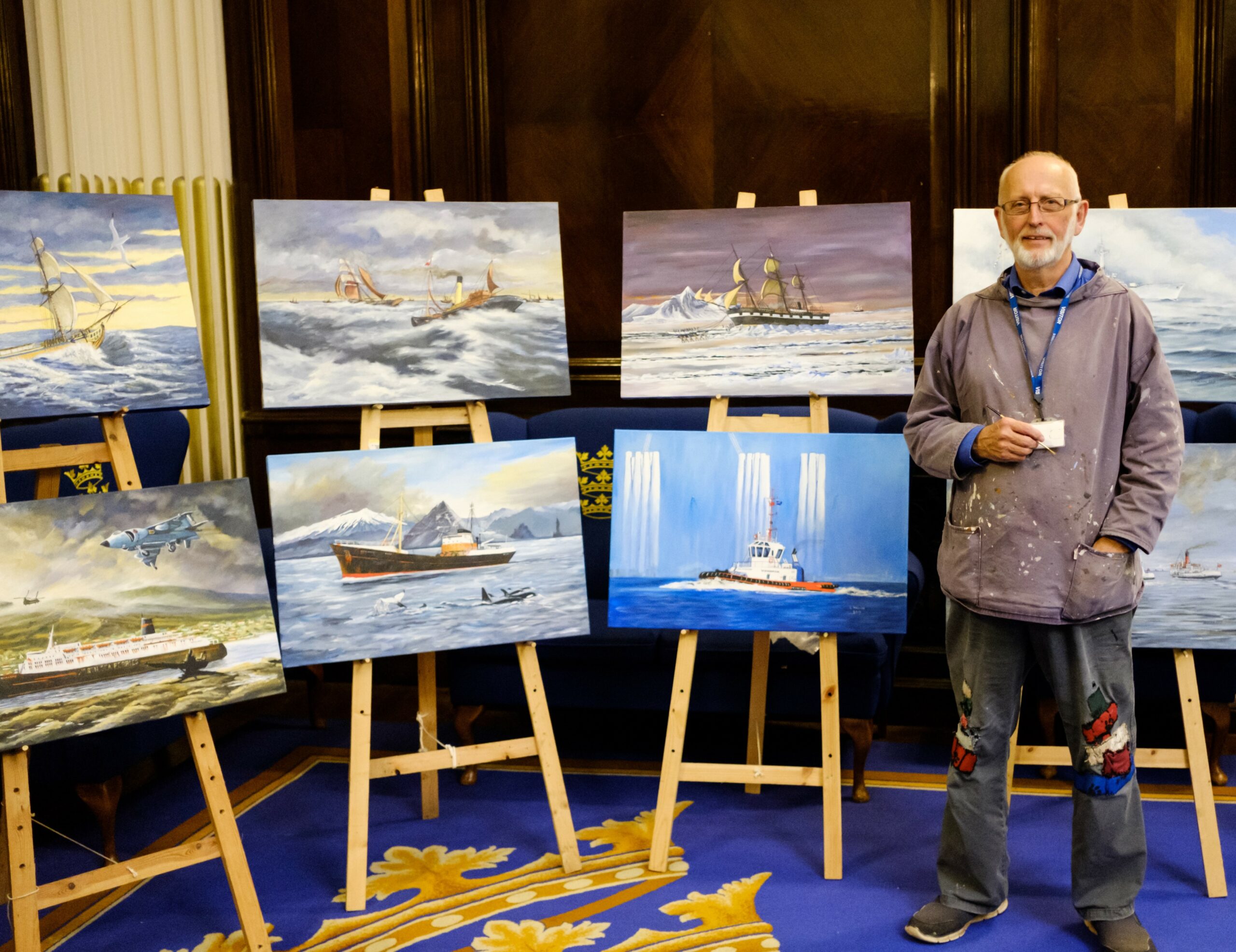 The 102-year-old son of a former skipper of the Viola trawler has signed up to support two of his favourite charities which have joined forces to create a unique fund raising offer.

Eric Tharratt has signed two of the “Homeward Bound” calendars produced by the Viola Trust to raise awareness and money as part of their campaign to bring the Viola trawler back to Hull.

The calendars will be sold in a silent auction by the Sailors’ Children’s Society, with the prize also including a place for each successful bidder, as guests of the Viola Trust, at the official welcome party when the Viola returns.

The two charities will split the proceeds of the sale. Bids can be placed by sending an email with your bid amount to wendy.fish@sailorschildren.org.uk Alternatively you can call Wendy Fish on 01482 342331 and request a card which can be used to submit your bid. The auction will close at end of business on Monday 16 December and the calendars will be forwarded to the successful bidders.

Eric, of St Nicholas Avenue, Hull, is the eldest of five children whose father, George William Tharratt, was skipper of the Viola before the Great War. When George died in the late 1920s, Eric’s mother, Dorothy, told her five children that one of them would have to go to Newland Homes because she could not afford to keep them all at home.

Dorothy selected the youngest, two-year-old Violet, as the child who should leave but Eric insisted he would go because he was nearly 12 and could leave after two years and earn an income to support the family as the man of the house.

When he was 14, Eric got a job on a farm at Thearne and four years later he joined Smith & Nephew, where he stayed for 46 years until retirement.

He said: “I’d wanted to go into the navy but the people at Newland Homes had to keep me until there was a job and the next one to come up was in farming.

“It’s wonderful that these calendars are to be auctioned for such good causes. The Viola was once my dad’s ship and Newland Homes played an important part in my life.”

The two calendars have also been signed by Larry Malkin, the Holderness-based artist who came up with the idea of painting a selection of vessels which are from Hull or which have a strong connection to the city.

Business sponsors including Andrew Jackson Solicitors, Arco, RSM UK, SMS Towage and 1884 Wine & Tapas Bar covered the cost of printing 500 copies of the calendar. Fewer than 50 remain, and only the two in the possession of the Sailors’ Children’s Society carry the signatures of both Eric and Larry.

Deanne Thomas, Chief Executive Officer of the Sailors’ Children’s Society, said: “We found Eric’s remarkable story very moving and we hope others will feel the same way. We are delighted that Eric and the Viola Trust felt it appropriate to support our work in addition to the campaign to bring the Viola home.

“Their target date for the return of the historic vessel is early 2021, which is also the year of the 200th anniversary of the Sailors’ Children’s Society. The prospect of us all celebrating together is extremely exciting and we hope people will bid generously not just to receive a commemorative calendar and book a place at the welcome party but also to support our programme of winter grants and to help the Trust raise the funds it needs.”

Norman Court, Project Manager for the Viola Trust, said: “We are working very hard to bring the Viola back to Hull and as our target date of early 2021 coincides with such a big occasion for the Sailors’ Children’s Society we decided, with Eric’s blessing, to partner with them for this unique opportunity.

“Demand for the calendar has been very strong. Some calendars are still available in retail outlets throughout Hull and East Yorkshire but we expect to sell out soon and of course only two people can claim the special, signed calendars. We are very grateful to the Sailors’ Children’s Society for organising the bidding process and we really hope that people respond generously and help us all make this a great success.”

The Viola features on the cover of the calendar and for the month of April. Other featured vessels are the Kirkella, Humber Barges, Norland, HMS Bounty, Lincoln Castle, HMS Britannia with HMS Yarmouth, Manxman, Sea Challenger, Arctic Corsair, Rialto and Diana.

Copies of the calendar are available from Hotham’s Distillery, 1884 Wine & Tapas Bar and the Maritime Museum in Hull city centre as well as from selected Post Offices and newsagents. It can also be ordered from the Viola Trust by sending an email to info@violatrawler.net

The Viola was built in Beverley in 1906 and operated from Humber Dock – now Hull Marina – as part of the Hellyer fleet of boxing trawlers. She was requisitioned to defend the UK in the Great War and left Hull for the last time in 1918 on a career which took her to Norway, Africa and Argentina, catching fish, hunting whales and elephant seals and supporting expeditions in the South Atlantic.

In 1982 she was the target of scrap metal merchants from Argentina. But when they landed they ran up the Argentine flag, an action which led to the Falklands War.

Details of the Viola’s history and the campaign to bring her back to Hull can be found at the Viola Trust’s website at www.violatrawler.net

Donations can be made through a link on the site and by purchasing the Viola commemorative gin from Hotham’s Distillery itself and through their website at www.hothams.co.uk