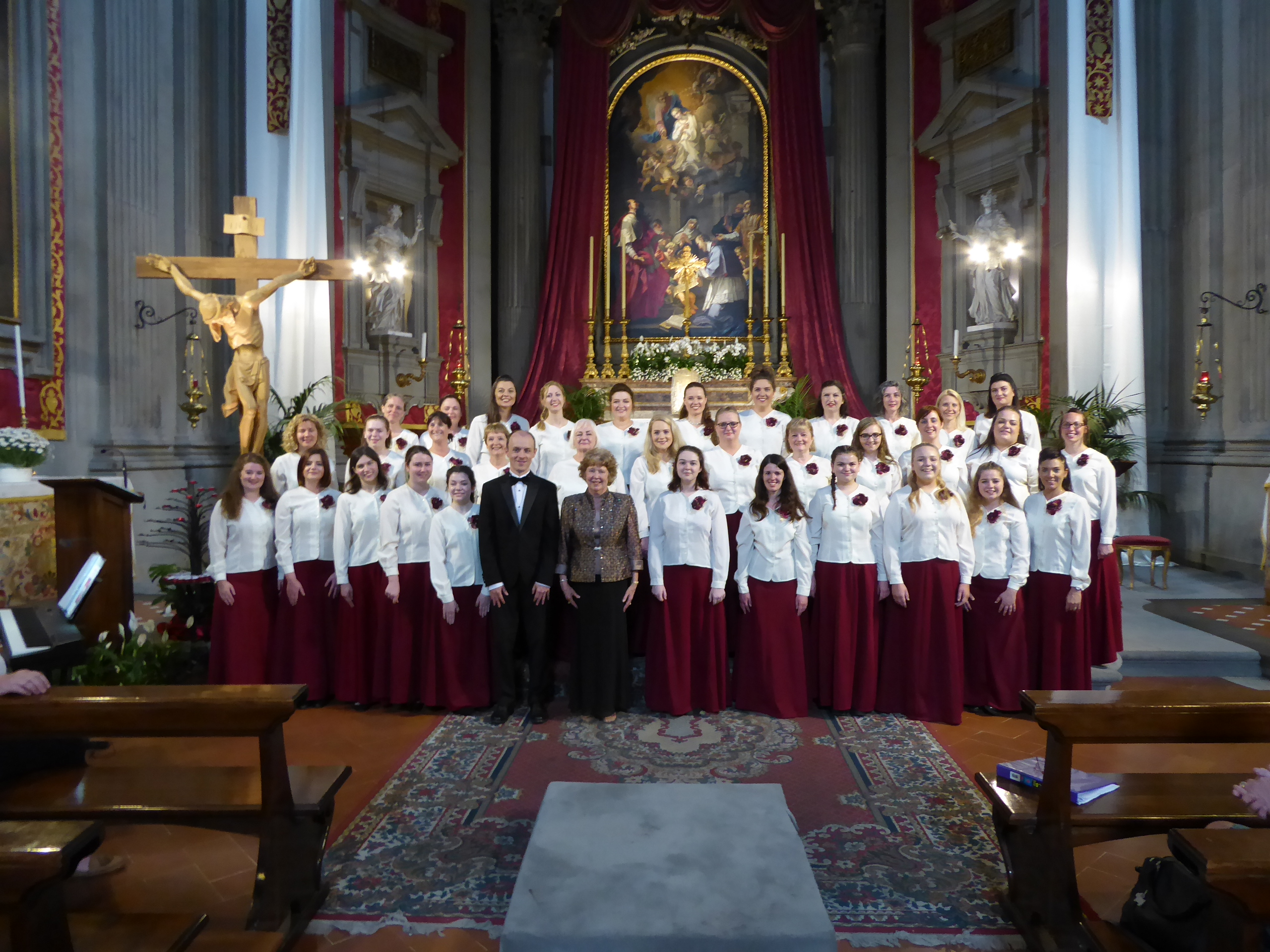 MAUREEN HUNTER, ALCM, LGSM, FLCM … .started her musical education by studying the piano with her mother, the late Mrs Vera Pendrick, up to ALCM standard. However, at the age of 17 she was awarded an Exhibition of the Guildhall School of Music for singing, and her main interests settled in that direction. Further study resulted in her LGSM diploma. A consistent winner in musical festivals around the North of England, folk soon came to expect and enjoy Maureen’s high standard of singing as a principal soprano. She continued her training most significantly with the late Betty Middleton of Saltburn. In 1980, Maureen was awarded the rare distinction of a Fellowship of the London College of Music for singing performance. After years of performing in amateur opera and concerts with husband Graham, she began to find an increasing challenge and satisfaction in the teaching of singing, so much so that in 1984 she decided to form a ladies choir from her pupils and to dedicate all her musical energies to the young therein. At the end of August 1992 Maureen took early retirement from Reckitt and Colman Plc, where she had worked since leaving school, to devote more time to providing singing tuition of the highest possible standard for young ladies (and boys!). Maureen is able to develop vocal potential to the full, and has created choirs which uniquely represent Hull and England wherever their singing takes them.

The Maureen Hunter Singers have been giving musical pleasure since the Choir was formed in 1984 with just 11 members; now there are about 60 young ladies in the Senior Choir and 25 children in the Junior Singers.  Initially, the Choir only performed locally and the Choir’s first entry into competition was at the Hornsea Musical Festival.  The Choir’s widening reputation led to Concerts throughout the country and abroad.  Most of the Choir have been members for many years, but inevitably some leave each year for further education or employment in areas far away from Hull.  The new members of the Choir now arise mainly from the ranks of the MH Junior Singers, which was started in 1992 for 8-14 year old girls, and is an excellent young choir in its own right.  The Junior Singers entered the inaugural BBC North’s Choir Competition in May 2001, and did extremely well to be runners-up in the final for the 18 year-and-under Community Choirs section. The MH Juniors now happily welcome both boys and girls into their ranks.

Every year of the Choir’s existence has been marked with outstanding concerts, competitions or international tours.  Their annual Spring Concerts in Bricknell Avenue Methodist Church, and Christmas Concerts in the Hull City Hall, Hull Guildhall, and currently, in the Middleton Hall of the University of Hull, are now well established events in the local musical diary.  The many memorable landmarks in the Choir’s history are too numerous to mention in detail, but they include entertaining at Royal Gala Banquets, singing for Her Majesty the Queen at the opening of the new British Red Cross Centre in Hull, concerts with the Duke of Kent’s Band of the Royal Regiment of Fusiliers, the Brighouse and Rastrick Band, the Yorkshire Imperial Band, the Black Dyke Mills Band, the Humberside Police Band, the East Yorkshire Motor Services Band, the Grimethorpe Colliery Band, the Williams Fairey Band, the YBS Band, the Hammonds Saltaire Band, the Cory Band, the Band of the Royal Air Force Regiment, the Band of the Royal Air Force College, the Mike Brown Band and the Riverside Brass ensemble.

The Choir reached the semi-finals of the Sainsbury’s Choir of The Year Competition in 1986 (Youth Section) and in 1988 (Adult Section), and in 1994 it reached the quarterfinals of the section for Youth Choirs with a selection of singers from the Senior and Junior Choirs.  The Junior Choir, augmented with several of the younger singers from the Senior Choir, competed in the International Children’s Choirs Section at the Llangollen Eisteddfod in July 1994; they were the highest placed English choir, and performed extremely well, to be placed 6th out of 32 choirs from all over the world.

The Choir has given many broadcasts on local radio, BBC World Service radio and Radio 3, Classic FM, BBC TV, Granada TV, Canadian TV, American Breakfast TV and on Sky television, and featured in the BBC’s ‘Songs of Praise’ when it was last produced in Hull. The younger section of the Senior Choir sang a carol on a YTV ‘Calendar’ Christmas programme in 1997.  A senior group also sang on BBC TV’s ‘Look North’ just before Christmas 2004, and on Yorkshire TV’s ‘Calendar’ programme just before Christmas 2007. In March 2010 the Choir was again featured on BBC TV’s ‘Look North’ – this time in connection with their trip to the Vatican.

In 1999, on an American Tour, the Choir became the first (and only) UK Choir to sing at the beautiful Crystal Cathedral, Garden Grove, California; the service was later broadcast throughout America, Canada, Australia, Africa, Asia and Europe to more than 30 million people in 154 countries.  The Choir sang again at the Crystal Cathedral in April 2003, as part of its fifth tour of North America and Canada.

Other concerts on this trip were given in Las Vegas (where a programme was shared with a Baptist Spiritual Choir), in Disneyland (Anaheim) and in Toronto.

This tour provided some outstandingly memorable events and sights, such as the spectacular ‘Glory of Easter’ pageant at the Crystal Cathedral, the peaks and canyons of Zion and Bryce National Parks, and the spectacular Niagara Falls.  On these visits abroad, the Choir has always been an official Ambassador for the City of Kingston upon Hull and, at every concert, personal friendships are made and relations strengthened within the musical worlds of England, the United States and Canada.

The Choir has to date given over 150 major concerts, in addition to taking part in many smaller events, appearances on TV or in competitions.  In 2004, to celebrate the twentieth anniversary of their foundation, the Choir produced a commemorative CD (‘MHS Score!’) and gave a concert in Disneyland Park (France). The undoubted highlight of 2005 was the performance of a complete Choral Evensong in Westminster Abbey, replacing the Abbey’s regular choir.

Highlights of 2006 came firstly in May, with the Choir’s second ‘Continental Dash’ over to Paris and Bruges, including another concert in Disneyland – plus lots of nauseating roller coasters! Then in October 2006, the girls had the tremendous thrill and privilege of singing Evensong in St. Paul’s Cathedral – again replacing the regular Cathedral choir. How well they did so, may be judged by the fact that after the service the priest in charge enthused to Maureen and Graham – ‘Wonderful choir. You must come again. Just give me a ring!’ Well, we did – the result being that in autumn 2007 the girls returned to St. Paul’s and again sang Evensong, to much acclaim.

2009 was a special year because the Choir celebrated its 25th Anniversary. At the end of May, as a result of the great successes of their singing in Westminster Abbey and St Paul’s Cathedral, the Choir took up an invitation to sing in the main celebration of Mass in the great Cathedral of Notre-Dame de Paris. Apart from spending time exploring Paris, the three coach loads of choir and supporters enjoyed  a full day ‘playing’ in the two Disneyland theme parks as well as free time in the lovely old town of Bruges.

At the end of October 2010 the Choir enjoyed another fabulous trip – this time to sing in a celebration of Mass in the breathtaking St. Peter’s Basilica in the very heart of the Vatican. Whilst in Rome, they gave a concert in another of Rome’s beautiful old churches (the Oratorio del Caravita) – where many celebrated musicians have performed in the past, including Palestrina, Bach, Haydn and Mozart! They also did some ‘touristy’ things in and around Rome.

In June 2012 there was another exciting trip to Italy, this time to the unique ‘water-world’ city of Venice. The girls sang in a service of worship in the magnificent St Mark’s Basilica, as well as giving a full concert in the beautiful Church of San Salvador, very close to the famous Rialto Bridge right in the centre of historical Venice.

In February 2013 the Choir had the tremendous privilege of singing Evensong in the wonderful St. George’s Chapel in Windsor Castle.

The Choir’s ‘Pearl Voices in Spring’ concerts in April 2014, at our home-base of Bricknell Avenue Methodist Church, were great fun – and proved to be a lovely way to celebrate the Choir’s 30th Anniversary. Celebrations continued with a wonderful tour to the Rhineland area of Germany. This included singing in the immense Cologne Cathedral (the largest Gothic church in Northern Europe), as well as giving a couple of concerts – and, of course, exploring some of the beautiful towns and scenery around the river Rhine.

Following all the excitement of the 30th Anniversary year, 2015 proved to be much more relaxing – with just the annual ‘Voices in Spring’ concerts, a ‘no singing’ trip to London to see a West End show, a lovely concert in Hornsea and finally, Christmas celebrations in the Hull Guildhall.

In May of 2016 the Choir enjoyed an exciting trip over to Belgium, specifically to sing ‘In Flanders Fields’ as part of the ‘Last Post Ceremony’ at the Menin Gate WW1 memorial. This moving occasion, sited in a main street in Ypres, was attended by about 2000 people – but you could have heard a pin drop. The girls’ a cappella singing under the memorial archway sounded truly breathtaking. Concerts are also took place in the ancient settings of the St. Bavo Cathedral in Ghent and the St. Salvator Cathedral in Bruges. December saw the Choir’s very first annual ‘Christmas Voices & Brass’ concert to be staged in the wonderful, completely rebuilt setting of the University of Hull’s Middleton Hall. Indeed it was a great privilege to be presenting the very first choir concert here – so it was really special.

2017 was a bit of a ‘rest’ year (no trips abroad), apart from the usual ‘Voices in Spring’ concerts at Bricknell Avenue Methodist Church, and ‘Christmas Voices & Brass’ concerts at Middleton Hall.

In May of this year the Choir had another great trip over to Italy – this time to the beautiful area of Tuscany, based in and around the Renaissance city of Florence. There was much site seeing, plus three really splendid concerts in stunning locations, one of which was in a Romanesque spa – in which the famous ‘3 Tenors’ had performed. Hallowed ground indeed!