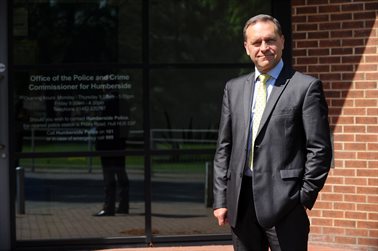 The office of Police and Crime Commissioner Keith Hunter has been successful in a bid to the Home Office Early Intervention Youth Fund.

A total of £337,500 has been awarded for projects which will operate across the whole of the Humberside Police force area, to help divert children and young people away from crime. The funding runs until March 2020.

There are four projects which have secured funding, some of which began as Hull-based schemes which will now expand to cover the whole of East Yorkshire and Northern Lincolnshire. They are: 1) Not In Our Community – An awareness and interactive information campaign aimed at children and young people to prevent criminal exploitation. The campaign will engage all schools across Humberside and provide interaction with children and young people through social media platforms.

2) No More Knives – An impactful campaign on the dangers of carrying knives originally developed in Hull by The Rich Foundation and to be delivered through the four Community Safety Partnerships (CSPs). No More Knives has been developed as a multimedia campaign aimed at the young population and includes a full educational pack for schools.

3) The Tommy Coyle Foundation – A mobile gym with a boxing and sports theme designed to engage children and young people in areas of high crime and characterised by high deprivation. The project aims to engage the most challenging young people in

their own communities in the evenings and weekends through the mobile gym, across the Humber area.

Now funding has been secured, plans are being developed for delivery of the projects to start in early 2019 and more detail will be released in January.

Police and Crime Commissioner Keith Hunter said: “It is vitally important for us to invest in the future of our young people, especially those growing up in areas of high crime and deprivation, who may be at risk of being diverted into crime or at danger of being exploited. All four of the projects receiving funding from this award already have a track record of success in the areas where they have operated and will now be able to spread their work across the Humber area, sharing good practice, to make a positive difference to some of the most vulnerable members of our society.”

A message from Reeds Rains