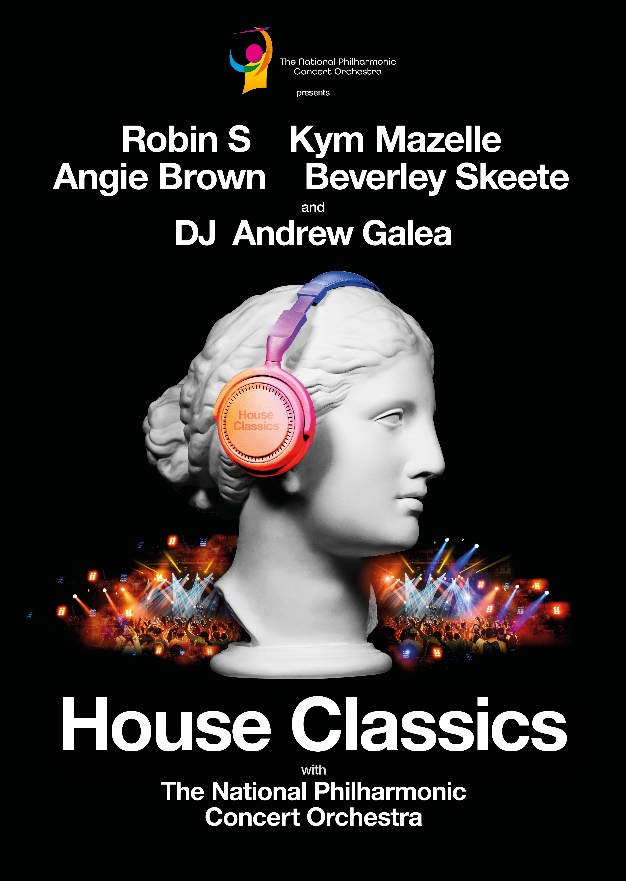 They were the songs that defined an era– Show Me Love, Young Hearts Run Free, No More Tears (Enough Is Enough), Finally – and the artists that defined an era – Robin S, Kym Mazelle, Angie Brown and Beverley Skeete – now for the first time, House Classics – celebrating the most iconic house tracks from the 1990’s, performed and reimagined by some of the most recognisable vocalists of the decade live on stage with the NPCO on a nationwide UK tour.

Including a set list curated by veteran DJ Andrew Galea, House Classics with The National Philharmonic Concert Orchestra will feature bangers from the legendary 1990’s club scene experienced like never before.

Singing their own global smash hits, as well as the biggest tracks of the decade, the ladies will combine their unique vocal abilities to celebrate the artists behind these revered songs, presenting each track in a specially orchestrated way.

Appearing together on stage for the very first time, these powerhouse vocalists will step out from behind the studio curtain and into the spotlight, performing solo tracks as well as collaborative versions of some of the most recognisable club classics from the 1990’s.

Set in some of the UK’s most stunning theatres, House Classics will bring the electric club atmosphere of the glorious golden years of house back to life, promising to be one of the biggest parties of the year.

Robin S comments, “Prepare to unite with us, as we bring house music into a new chapter.  Iconic house tracks of the 90’s … Come and show us all some love at the most esteemed classic house tour of 2022!”

Kym Mazelle says, “Let your Young Hearts Run Free! Come to see me, Kym Mazelle and my sisters of house sing all the uplifting anthems alongside our live orchestra. It is going to be epic!”

Angie Brown adds, “Music is the answer, house music in particular is about, all genres, all races and all ages coming together as one, having a great time to re-live the heady happy days of the 90’s! Bring it on!!!”

Beverley Skeete continues, “After the year we have all had it’s finally time to celebrate with the joyful music of the classic house and an orchestra in the company of some beautiful, talented and soulful divas. We’ve all been missing performing live but more importantly we miss the gorgeous people we meet, who follow and support house music with a passion! It’s going to be a night to remember, US, YOU and the classics we all love!”

DJ Andrew Galea concludes, “House music has always been my life and made me who I am today.  Close your eyes and bring back the happy memories, the soundtrack to your youth and beyond. Get ready for the classic house show of the year, which will bring us all back together again!”

Robin S rose to fame in 1992 with her huge debut single Show Me Love, which landed at #5 in the US Billboard Chart and #6 in the UK official chart, going on to receive Platinum status. She performed the track at the 1994 American Music Awards, before releasing follow up singles Luv 4 Luv and What I Do Best.

Credited as being the ‘First Lady of House Music’, Kym Mazelle has achieved 7 UK top 40 singles to date, including 1989 duet with Robert Howard, Wait, 1994 cover of No More Tears (Enough Is Enough) with Jocelyn Brown, and 1996 cover of Young Hearts Run Free. Mazelle also featured on Soul II Soul’s classic Missing You.

Angie Brown is best known for her work with electronic music group Bizarre Inc, performing lead vocals on a number of their singles, including certified silver hit single I’m Gonna Get You and Took My Love. She went on to feature on smash hit Return of the Mack by Mark Morrison, and Culture Club’s 1999 album Don’t Mind If I do, as well as co-writing with Holly Johnson of Frankie Goes To Hollywood on Disco Heaven.

Famed for her fusion of gospel and house music, Beverley Skeete featured on Gat Décor’s top 10 single Passion, which she performed on Top Of The Pops in 1996. For the past 13 years, she has been performing with Bill Wyman’s Rhythm Kings as lead vocalist and has also provided vocals on films such as Evita starring Madonna, The Beloved starring Oprah Winfrey, and The Hitman’s Bodyguard starring Samuel L Jackson and Ryan Reynolds.

Beginning in Guildford on Tuesday 18th March, House Classics will call at 13 venues throughout the UK, including the renowned Hammersmith Eventim Apollo in London, before finishing in Cambridge on Sunday 3rd April.