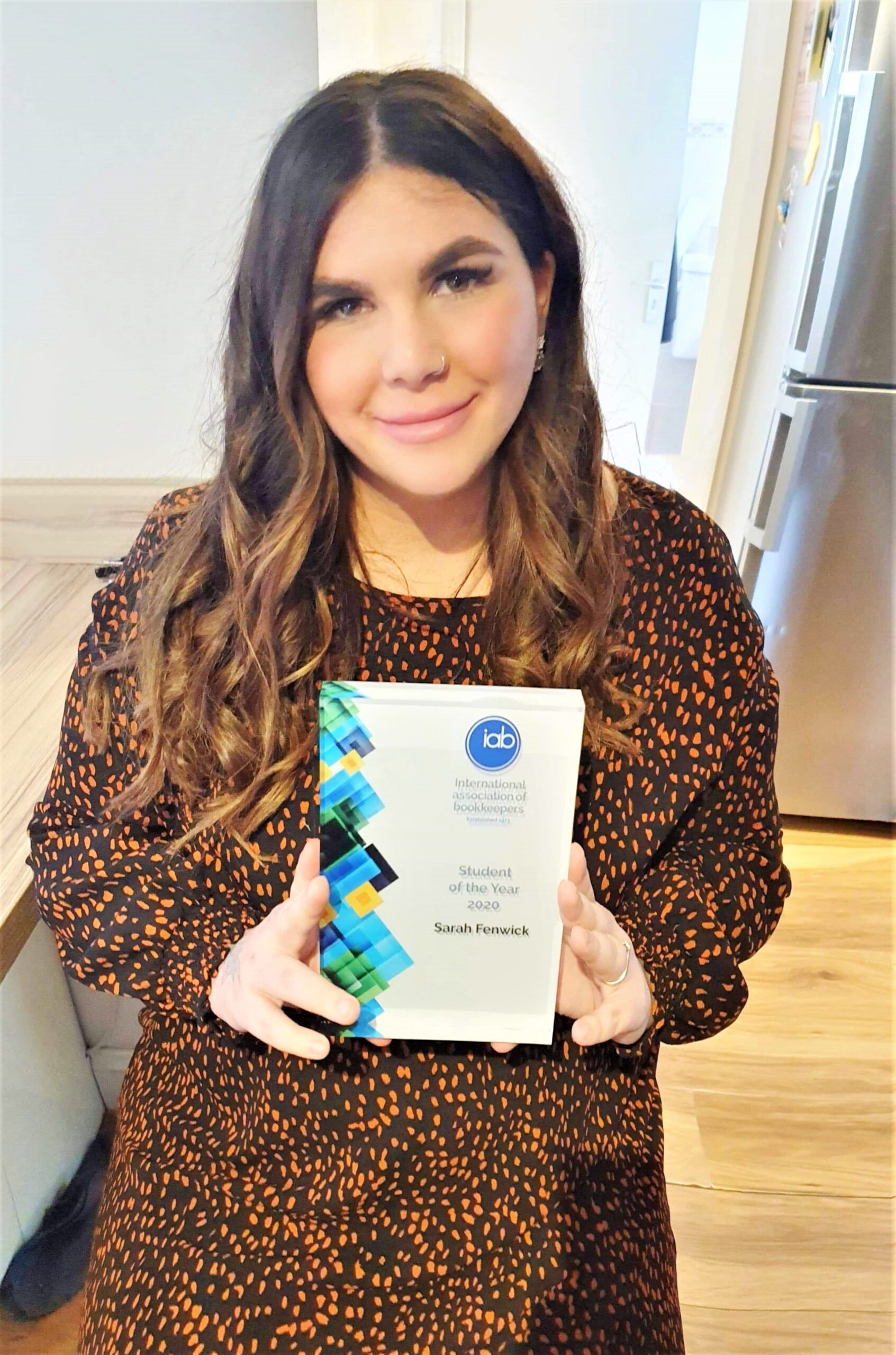 A young woman who built a successful company with her partner after they initially met in a care home has scooped an international business award – reaching the top of the tree for her efforts to look after the bottom line.

Sarah Fenwick, who with Gareth Pennington set up Tree Fellas Hull Ltd in 2019, has been named Student of the Year by the International Association of Bookkeepers (IAB).

But as the couple celebrate they are also changing the way their business works to combat the impact of coronavirus, with orders having slumped after a bumper start to the year dealing with storm damage.

Sarah’s trophy was posted by the IAB and “presented” in a Zoom awards ceremony after the cancellation of a prestigious celebration at the House of Lords terrace.

She said: “We were gutted to miss out on our first trip to London but I was overwhelmed when I heard I had won. It was a beautiful piece of news given the difficult time that we are in at the moment and it definitely lifted my spirits. It’s topped everything for me and the company. We’re all absolutely buzzing about it.

“The IAB have invited all of this year’s winners to attend next year’s ceremony instead so we’re looking forward to that and drawing up a list of the attractions we want to see!”

Sarah and Gareth met in a care home in Hull in 2005. They escaped the issues around homelessness, drugs and mental health which trapped many of their family, and friends but they later lost touch.

The couple were reunited after Sarah moved into her own place when she was 18, and they started to build their relationship and believe in a brighter future.

Gareth joined Hull City Council on a care leavers scheme, gaining a diploma in horticulture and qualifying as a tree surgeon. He left his job early in 2019 to set up Tree Fellas, which now has a team of six offering all types of tree care, maintenance of trees, tree pruning and launching a huge campaign around tree planting.

Sarah pursued a career in credit control and then moved to KCOM, the Hull-based communications and IT services business. Even with two young children at home she held down her KCOM role whilst also building Tree Fellas and studying for her qualifications.

She left KCOM in late 2019 but still holds a second job, having taken the role of Young Person’s Youth Enterprise Champion, which gives her the chance to use her real-life experiences to help others.

The Hull-based John Cracknell Youth Enterprise Bank paid for Sarah’s Level 1 training and HCUK Training secured funding for Level 2. The tuition was provided by Golding Computer Services in Hull, with Di Garbera, a director of the company and IAB Tutor of the Year for 2019.

Di said: “Sarah’s story is amazing and she fully deserves this award. She told me that 10 years ago she probably used her history as an excuse because she didn’t think anybody with her background could do the things she dreamed of doing.

“But she’s made remarkable progress, putting her past behind her and with Gareth’s help setting up a great business, completing a year’s trading and securing two qualifications. She’s also changed jobs and is sharing her experience with others.”

The challenge facing Sarah and Gareth now is to keep building Tree Fellas, which literally started 2020 with a bang as work came in from storm damage but which is now coming to terms with the impact of coronavirus.

Sarah said: “We are grateful for all the work we get even at the best of times and even more so in current circumstances. For many people it was a very difficult start to the year with all the storms and while we wouldn’t wish that on anybody it’s the money from the clean-up and recovery work which is keeping us afloat.

“We’ve checked the official advice and we can work if we put social distancing in place. Clients send us images of jobs and we use them as the basis for a quote All the workers go out in separate vans and cars and are allocated one piece of equipment each which they wipe down at the end of each day. They keep their distance all day.

“We’re trying to go out and do as much as we can to cover our fixed overheads because as a young business we really don’t want to close down even temporarily. We’re doing all the usual jobs, pruning and hedge trimming as well as a full emergency call-out service at all times.”

Charles said: “Sarah has overcome a wide range of disadvantages and, as a former care leaver myself, I know how those experiences are always with you. She has certainly ensured she is not a prisoner of her past and by working with Goldings has shown what can be achieved.”

Sean said: “We were sorry to lose Sarah as a colleague but are delighted at what she has achieved in establishing her own business and supporting others who are seeking to do the same.”

Tracey back on frontline after Covid-19 vaccination

An App a Day… Helping Humber Stay Happy and Healthy