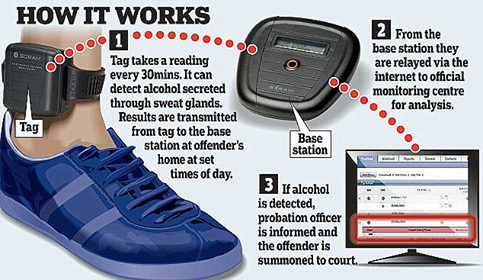 A pilot scheme requiring offenders to abstain from alcohol and wear an alcohol monitoring tag returned positive results, according to an initial report by the National Centre for Social Research (NatCen).

Offenders were required to wear an electronic tag around their ankle which accurately detects the presence of alcohol in an individual’s system and alerts probation services of any noncompliance with the alcohol ban, in the event of which the requirement could be enforced and the offender returned to court.

Magistrates’ and Crown Courts in the pilot areas were able to impose an AAMR as part of a community sentence or suspended sentence order imposed on offenders who had committed violent and other crimes, while under the influence of alcohol.

Unlike other pilots, the HLNY approach used the period without alcohol ordered by the court to work with offenders in a bid to prevent them from reoffending. A very significant feature of the HLNY pilot was the inclusion of domestic violence offenders. Offenders were screened before being tagged to ensure that the tags were not used on people who were alcohol dependent or had certain medical conditions.

 Over the course of the pilot, 226 individuals were issued the AAMR order. These individuals were predominantly white (98%) and male (88%). Almost all (96%) wearers were under 50 years old.

 Half (52%) of wearers were sentenced in Lincolnshire, one-third (33%) in Humberside and 13% in North Yorkshire at the time of receiving the AAMR order.

 Compliance with the AAMR was high, 94% successfully completed the requirement and 97.4% of all the days monitored were free of alcohol.

 In all but one case, the AAMR was ordered alongside other requirements such as accessing the Building Better Relationships domestic violence programme and support through external organisations to help with other specialist issues such as employment, housing, domestic violence and substance misuse.

An initial process evaluation report by the National Centre for Social Research (NatCen) has been published and the partnership has also commissioned them to undertake a full outcomes evaluation of the pilot and they will report back later this year. Its aim is to assess whether and to what extent the pilot positively affects offenders’ behaviour, including reduced reoffending rates.

Humberside Police and Crime Commissioner Keith Hunter said: “Reoffending rates are much higher for people where alcohol plays a role in the offence. As this pilot scheme has indicated, there is a likelihood we can reduce the victims of crime in the future, particularly victims of domestic abuse. The period in which the offender is tagged will give rehabilitation agencies a real opportunity to work with the individual and get them to recognise and change their behaviour, hopefully for good. I would like to see these orders available nationally as a standard feature of the Criminal Justice System.”

She said: “The pilot was an excellent example of partnership working and shows what can be achieved when Criminal Justice organisations collaborate to support the delivery of new interventions to reduce reoffending. Case managers have had feedback from offenders that probation support, together with the discipline involved in working with the requirement and alcohol tag have helped them commit to lasting change. This is fantastic as when people make sustained and positive changes to their lives we help to reduce reoffending and prevent future victims of crime.”